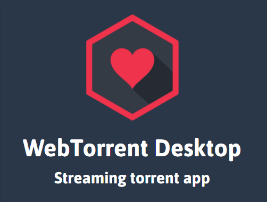 Fifteen years ago BitTorrent conquered the masses. It offered a superior way to share large video files, something that was virtually impossible at the time.

With the shift to online video streaming, BitTorrent has lost prominence in recent years. That’s a shame, since the technology offers many advantages.

This is one of the reasons why Stanford University graduate Feross Aboukhadijeh invented WebTorrent. The technology, which is supported by most modern browsers, allows users to seamlessly stream videos on the web with BitTorrent.

In the few years that it’s been around, several tools and services have been built on WebTorrent, including a dedicated desktop client. The desktop version basically serves as a torrent client that streams torrents almost instantaneously on Windows, Linux, and Mac.

Add in AirPlay, Chromecast and DLNA support and it brings these videos to any network-connected TV as well. Quite a powerful tool, as many people have discovered in recent months.

This week Feross informed TorrentFreak that WebTorrent Desktop had reached the one million download mark. That’s a major milestone for a modest project with no full-time developer. But while users seem to be happy, it’s not perfect yet.

“WebTorrent Desktop is the best torrent app in existence. Yet, the app suffers from performance issues when too many torrents are added or too many peers show up. It’s also missing important power user features like bandwidth throttling,” Feross says.

The same is true for WebTorrent itself, which the desktop version is built on. The software has been on the verge of version 1.0.0 for over two years now but needs some more work to make the final leap. This is why Feross would like to invest more time into the projects, given the right support.

Last month Feross launched a Patreon campaign to crowdfund future development of WebTorrent including the desktop version. There are dozens of open issues and a lot of plans and with proper funding, the developer can free up time to work on these.

“The goal of the campaign is to allow me to spend a few days per week addressing these issues,” Feross says, adding that all software he works on is completely free and always has been. 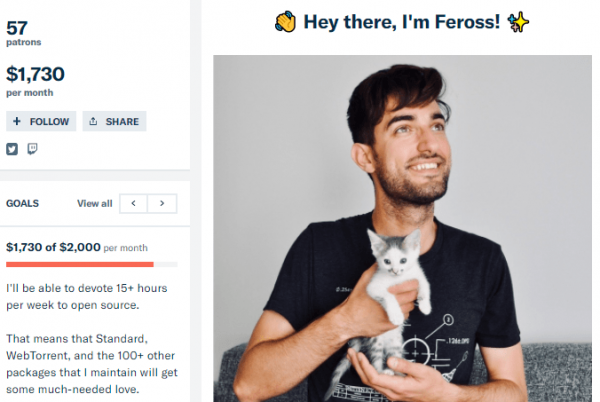 Thus far the fundraising campaign is going well. WebTorrent’s developer has received support from dozens of people, totaling $1,730 a month through Patreon alone, and he has signed up the privacy oriented browser Brave and video site PopChest as Platinum backers.

Community-driven funding is a great way to support Open Source projects, Feross believes, and he is encouraging others to try it out as well.

“I’ve been promoting Patreon heavily within my community as a way for open source software developers to get paid for their work,” Feross says.

“The norm in the industry right now is that no one gets paid — it’s all volunteer work, even though we’re generating a lot of value for the world! Patreon is a really promising solution for software people like me.”

People who want to give WebTorrent Desktop a try can download a copy from the official site. More information on the core WebTorrent technology and its implementations is available there was well. And if you like what you see, Feross still needs a bit of help to reach his Patreon goal.

from TorrentFreak http://ift.tt/2CGjfde
via IFTTT
Posted by papampi at 9:25 AM