Torrent sites come in all shapes and sizes, but generally speaking there’s a clear divide netween private and public sites.

The latter includes the likes of The Pirate Bay and are open to anyone, while private trackers require an account to gain access.

Because many of these close communities also enforce ratio requirements and other rules, they can log quite a bit of data. This generally isn’t the type of information users would like to see out on the streets, but such leaks are no rarity.

In recent days the Danish torrent tracker Hounddawgs.org also ran into some issues. Out of the blue, the site’s 40,000 users received a message signed by ‘Anonymous’ stating that it had been hacked. 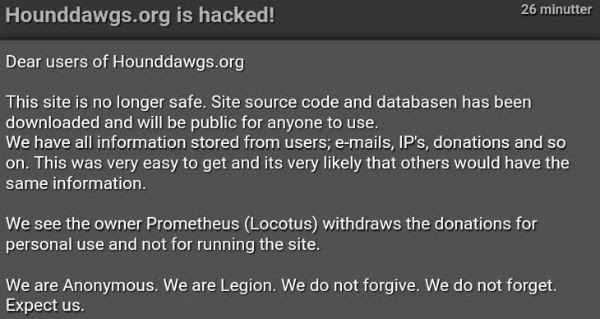 The hacker also noted that everyone had been promoted to “staff” but soon after the site went dark. It eventually returned with a message from the operator, accusing another private torrent site of ‘messing around.’

“We’re sorry, but due to server maintenance, we’ll be offline for a little while. Some kiddies from another Danish torrent site don’t like to share users so they found a way to mess a little with the site,” the notice read.

“No harm has been done, and we will be back up as soon as we have found the error and corrected it.”

The message seemed reassuring, but at the same time, a partially redacted file with usernames, emails, and IP-addresses started to circulate.

As a result, the rumor mill went into full swing, and people reported that other accounts where they used the same information, were being compromised. The Hounddawgs operators maintained, however, that allegations of a full database breach were false.

The site’s staff posted a new message refuting the hacking claims. At the same time, they also announced that the site would remain offline indefinitely.

Hounddawgs’ operators say they started the site as a counter-movement to the “tyranny” of other Danish trackers. However, these other trackers allegedly didn’t like the newcomer and fought back, up to a point where Hounddawgs decided to throw in the towel. 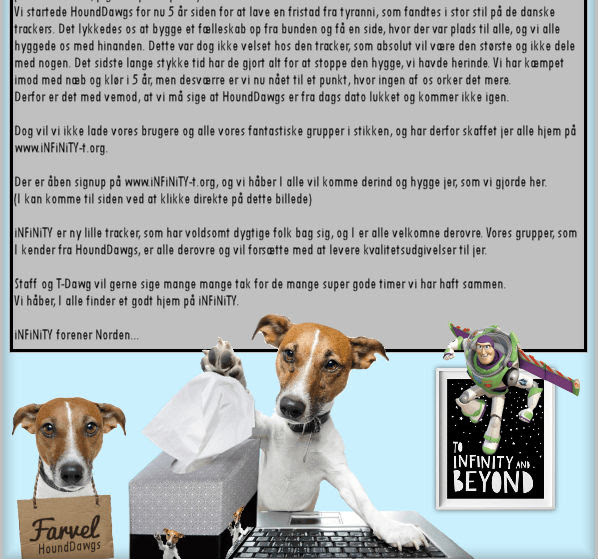 Private tracker feats are by no means new. They’re as old as private trackers. And while there are plenty opinions, since most of it takes place behind closed doors, the truth is often hard to find.

After the site’s operators said their goodbyes, pointing users to the new infinity-t.org tracker, the alleged hacker responded once more. This time posting over 20 gigabytes of data, said to be the full database and the site’s code.

“But how is that possible? The superheroes of the world, the people behind Hounddawgs, clearly stated on their frontpage that no database was leaked, so how could I possibly have it?” the hacker posted.

“They are lying! Like they have done for years, they don’t care one bit for their users,” the message adds, noting that the server was minimally secured.

The leaked files do indeed include site code and a database, which several people claim to be legitimate. The operators of Hounddawgs also changed their earlier tune. In a message posted on the site yesterday. They now apologize for not dealing with the security issues.

“It has NEVER been our intention to hurt any of you, and we were very happy with all the good users we had. We chose to close the site as a precaution, but unfortunately too late,” they write.

The site was running on the Gazelle script which logs quite a bit of data by default, including users’ IP-addresses. With this info out in the open, many users fear that anti-piracy groups may use the logs to identify individual pirates.

While it’s unlikely that copyright holders will pursue casual sharers based on leaked files, it’s never a pleasant thought to have one’s IP-addresses and other information leaked.

Although the local anti-piracy group, RettighedsAlliancen, might not spring into action right away, it won’t mind seeing the second largest tracker in Denmark go offline.

from TorrentFreak http://ift.tt/2Cppjrj
via IFTTT
Posted by papampi at 2:03 AM