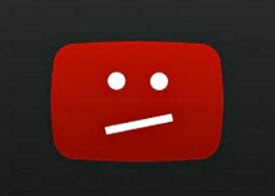 When people upload original content to YouTube, there should be no problem with getting paid for that content, should it attract enough interest from the public.

Those who upload infringing content get a much less easy ride, with their uploads getting flagged for abuse, potentially putting their accounts at risk.

“I teach and work in a music department at a University here in Australia. I’ve got a PhD in chiptune, and my main research interests are various intersections of music / sound / tech e.g. arduino programming and DIY stuff, modular synthesis, digital production, sound design for games, etc,” Tomczak informs TF.

“I started blogging about music around a decade ago or so, mainly to write about stuff I was interested in, researching or doing. At the time this would have been physical interaction, music controller design, sound design and composition involving computers.”

One of Tomczak videos was a masterpiece entitled “10 Hours of Low Level White Noise” which features – wait for it – ten hours of low-level white noise.

“The white noise video was part of a number of videos I put online at the time. I was interested in listening to continuous sounds of various types, and how our perception of these kinds of sounds and our attention changes over longer periods – e.g. distracted, focused, sleeping, waking, working etc,” Tomczak says.

White noise is the sound created when all different frequencies are combined together into a kind of audio mush that’s a little baffling and yet soothing in the right circumstances. Some people use it to fall asleep a little easier, others to distract their attention away from irritating sounds in the environment, like an aircon system or fan, for example.

The white noise made by Tomczak and presented in his video was all his own work.

“I ‘created’ and uploaded the video in question. The video created by generating a noise waveform of length 10 hours using the freeware software Audacity and the built in noise generator. The resulting, 10 hour audio file was then imported into ScreenFlow, where the text was added and then rendered as one 10 hour video file,” he explains.

This morning, however, Tomczak received a complaint from YouTube after a copyright holder claimed that it had the rights to his composition. When he checked his YouTube account, yet more complaints greeted him. In fact, since July 2015, when the video was first uploaded, a total of five copyright complaints had been filed against Tomczak’s composition.

As seen from the image below, posted by Tomczak to his Twitter account, the five complaints came from four copyright holders, with one feeling the need to file two separate complaints while citing two different works.

The complaints against Tomczak’s white noise 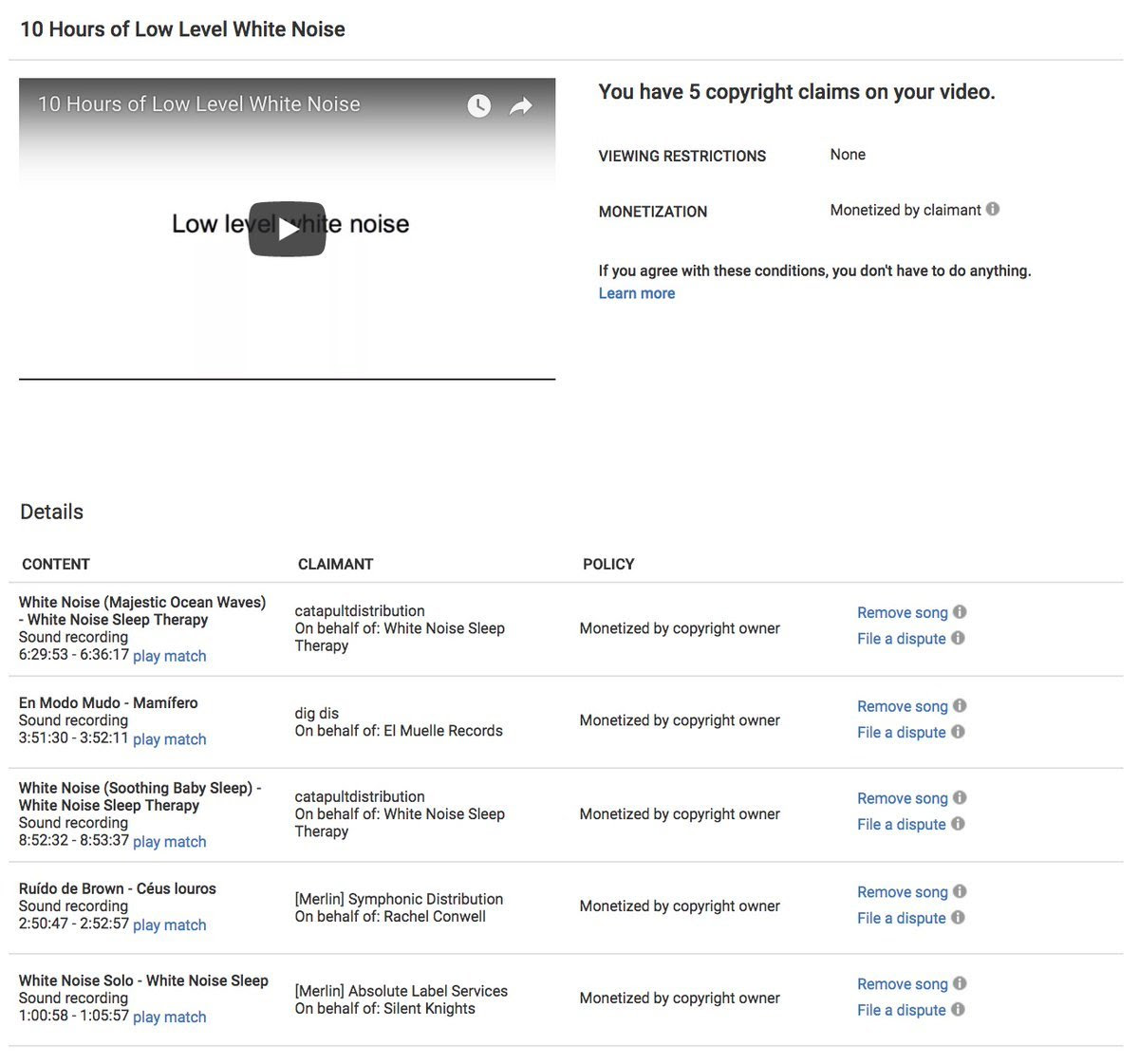 One company involved – Catapult Distribution – say that Tomczak’s composition infringes on the copyrights of “White Noise Sleep Therapy”, a client selling the title “Majestic Ocean Waves”. It also manages to do the same for the company’s “Soothing Baby Sleep” title. The other complaints come from Merlin Symphonic Distribution and Dig Dis for similar works .

Under normal circumstances, Tomczak’s account would have been disabled by YouTube for so many infringements but in all cases the copyright holders chose to monetize the musician’s ‘infringement’ instead. In other words, after creating the video himself with his own efforts, copyright holders are now taking all the revenue. It’s a situation that Tomczak will now dispute with YouTube.

“I’ve had quite a few copyright claims against me, usually based on cases where I’ve made long mixes of work, or longer pieces. Usually I don’t take them too seriously,” he explains.

“In any of the cases where I think a given claim would be an issue, I would dispute it by saying I could either prove that I have made the work, have the original materials that generated the work, or could show enough of the components included in the work to prove originality. This has always been successful for me and I hope it will be in this case as well.”

Sadly, this isn’t the only problem Tomczak’s had with YouTube’s copyright complaints system. A while back the musician was asked to take part in a video for his workplace but things didn’t go well.

“I was asked to participate in a video for my workplace and the production team asked if they could use my music and I said ‘no problem’. A month later, the video was uploaded to one of our work channels, and then YouTube generated a copyright claim against me for my own music from the work channel,” he reveals.

Tomczak says that to him, automated copyright claims are largely an annoyance and if he was making enough money from YouTube, the system would be detrimental in the long run. He feels it’s something that YouTube should adjust, to ensure that false claims aren’t filed against uploads like his.

While he tries to sort out this mess with YouTube, there is some good news. Other videos of his including “10 Hours of a Perfect Fifth“, “The First 106 Fifths Derived from a 3/2 Ratio” and “Hour-Long Octave Shift” all remain copyright-complaint free.

from TorrentFreak http://ift.tt/2CGk9Xf
via IFTTT
Posted by papampi at 1:36 AM