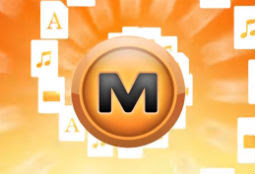 Following the 2012 raid on Megaupload and Kim Dotcom, U.S. and New Zealand authorities seized millions of dollars in cash and other property, located around the world.

Claiming the assets were obtained through copyright and money laundering crimes, the U.S. government launched separate civil cases in which it asked the court to forfeit bank accounts, servers, domain names, and other seized possessions of the Megaupload defendants.

One of these cases was lost after the U.S. branded Dotcom and his colleagues as “fugitives”.The defense team appealed the ruling, but lost again, and a subsequent petition at the Supreme Court was denied.

Following this lost battle, the U.S. also moved to conclude a separate civil forfeiture case, which was still pending at a federal court in Virginia.

The assets listed in this case are several bank accounts, including several at PayPal, as well as 60 servers Megaupload bought at Leaseweb. What has the most symbolic value, however, are the domain names that were seized, including Megaupload.com, Megaporn.com and Megavideo.com.

This week a U.S. federal court decided that all claims of Kim Dotcom, his former colleague Mathias Ortman, and several Megaupload-related companies should be stricken. A default was entered against them on Tuesday.

The same fugitive disentitlement argument was used in this case. This essentially means that someone who’s considered to be a fugitive from justice is not allowed to get relief from the judicial system he or she evades.

“Claimants Kim Dotcom and Mathias Ortmann have deliberately avoided prosecution by declining to enter or reenter the United States,” Judge Liam O’Grady writes in his order to strike the claims.

“Because Claimant Kim Dotcom, who is himself a fugitive under Section 2466, is the Corporate Claimants’ controlling shareholder and, in particular, because he signed the claims on behalf of the corporations, a presumption of disentitlement applies to the corporations as well.”

As a result, the domain names which once served 50 million users per day, are now lost to the US Government. The court records list 18 domains in total, which were registered through Godaddy, DotRegistrar, and Fabulous.

Given the legal history, the domains and other assets are likely lost for good. However, Megaupload defense lawyer Ira Rothken is not giving up yet.

“We are still evaluating the legal options in a climate where Kim Dotcom is being labeled a fugitive in a US criminal copyright case even though he has never been to the US, is merely asserting his US-NZ extradition treaty rights, and the NZ High Court has ruled that he and his co-defendants did not commit criminal copyright infringement under NZ law,” Rothken tells TorrentFreak.

There might be a possibility that assets located outside the US could be saved. Foreign courts are more open to defense arguments, it seems, as a Hong Kong court previously ordered the US to return several assets belonging to Kim Dotcom.

The Hong Kong case also brought some good news this week. At least, something that was supposed to be positive. On Twitter, Dotcom writes that two containers with seized assets were returned, but in a “rotten and destroyed” state.

“A shipment of 2 large containers just arrived in New Zealand. This is how all my stuff looks now. Rotten & destroyed. Photo: My favorite gaming chair,” Dotcom wrote.

According to Dotcom, the US Government asked him to pay for ‘climate controlled’ storage for more than half a decade to protect the seized goods. However, judging from the look of the chair and the state of some other belongings, something clearly went wrong. 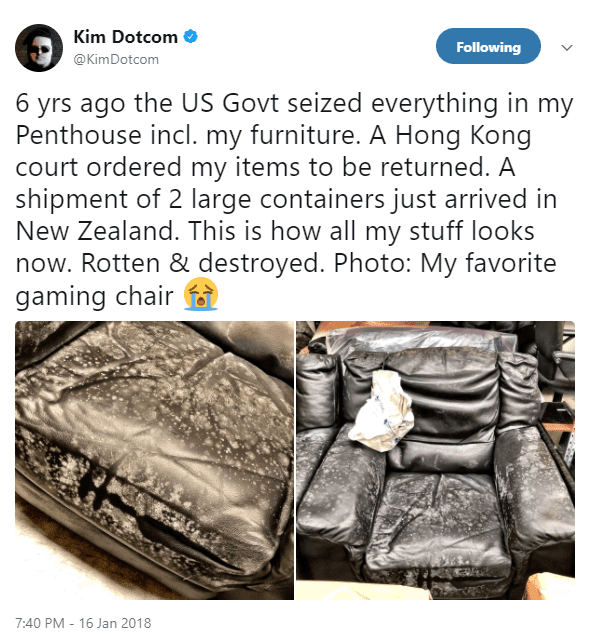 from TorrentFreak http://ift.tt/2FJONxA
via IFTTT
Posted by papampi at 2:37 AM