Pirates Plunder 4K Hateful Eight, But Did They Crack DCP? 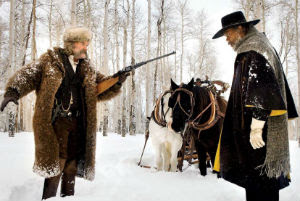 While leaks are nothing new, Hateful Eight appeared online in DVD screener format well in advance of its Christmas Day cinema debut, causing a pirate feeding frenzy that continued for many weeks.

In March, the DVD and Blu-ray versions of Hateful Eight were released to the public, which went some way to competing with the copies available online. However, in the knowledge that Hateful Eight had been filmed in Ultra Panavision 70 and captured in 4K, many fans were still keen to obtain the three-hour epic in UHD.

Some nine months after its debut there has been no announcement of when Hateful Eight will be made available in 4K. However, developments over the past few days suggest that a copy has already been made available online and pirates have somehow obtained a copy.

Although it’s possible an earlier source was involved, it appears the release was first made available on a UltraHDclub, an invite-only private tracker specializing in ultra high-definition movies. From there it spread to other private sites, albeit at a fairly leisurely pace due to its 40GB+ size. 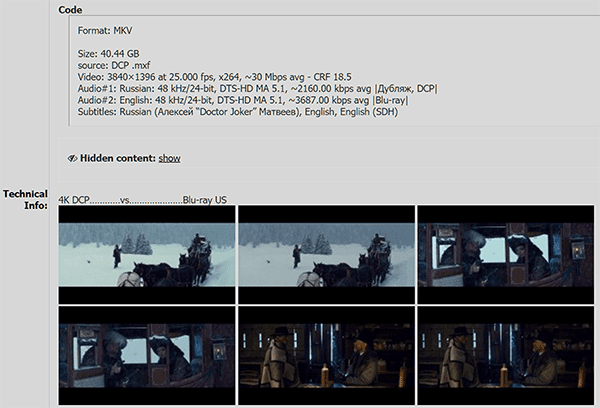 Details made available with the original release suggest that this 4K version of Hateful Eight was actually obtained from a legal source called Okko, something which is bound to irritate those U.S. fans waiting patiently for a home soil release.

Launched in 2014 and developed in partnership with LG Electronics, Okko is a VOD service that was designed to meet Hollywood strict content protection standards. The service has deals with most of the big studios and is even trusted to deliver some movies on the same day as they hit the silver screen. 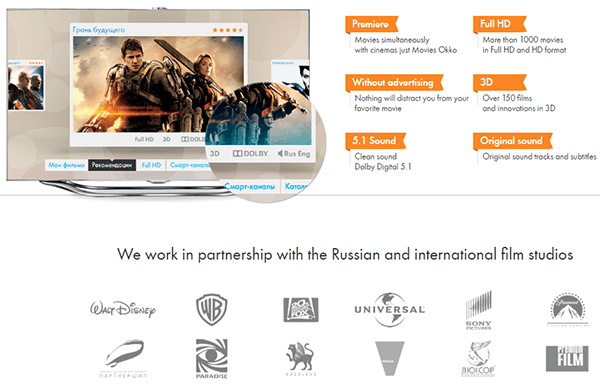 But aside from the availability of Hateful Eight in 4K at all, what is both interesting and controversial here are the claims being made by the people who obtained the movie from the Okko VOD service.

As previously reported, it is already possible to capture 4K content and put it on torrent sites. However, details provided with the release (and echoed in the tracker screenshot above) suggest that the copy was somehow made after pirates obtained a .MXF content file from within a highly secure Digital Cinema Package (DCP).

TorrentFreak contacted Okko for their take on the unofficial release but at the time of publication the service had not responded to our request for comment. Given the sensitive nature of the topic, it seems unlikely that the company would have given much away anyway, so we also took the opportunity to speak with several sources familiar with pirate releases.

One, the operator of a large site, didn’t doubt that the content was out there but wasn’t prepared to accept it was obtained from a highly protected .MXF file. The other, a release group member, said that while a crack seems unlikely, no system is without weakness. “I want to believe,” he said.

We also spoke with HDEncode who posted the 4K version of Hateful Eight and provided a number of 4K/Blu-ray comparison screenshots. The site’s operator told us that the people behind the release on UltraHDclub maintain that they have indeed cracked DCP’s encryption.

Commenting on the release, Sebastian Haselbeck of Tarantino fansite Tarantino.info says that while he’s not a fan of piracy, he believes that a failure to serve the market is the real problem.

“I strongly condemn piracy and find it generally damaging, but it is a symptom, not the source, of market failure,” he told TF.

“I believe the biggest obstacle to great sales is the general bare bones treatment Tarantino’s movies usually get on home video. Quality is also usually not reference material. Fans would easily spend on the roadshow cut of Hateful Eight or the integral cut of Kill Bill. Both are not available to buy.”

Why a 4K edition of Hateful Eight hasn’t yet been made widely available is a question for the studio, but once again it appears that pirates are the first to recognize and then meet demand, however niche.

from TorrentFreak http://ift.tt/2bVAoBx
via IFTTT
Posted by papampi at 9:44 AM