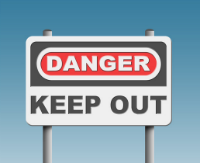 More than 35 years after 15-year-old high school student Rich Skrenta created the first publicly spread virus, millions of pieces of malware are being spread around the world.

Attackers’ motives are varied but these days they’re often working for financial gain. As a result, popular websites and their users are regularly targeted. Security company InfoArmor has just published a report detailing a particularly interesting threat which homes in on torrent site users.

“InfoArmor has identified a special tool used by cybercriminals to distribute malware by packaging it with the most popular torrent files on the Internet,” the company reports.

InfoArmor says the so-called “RAUM” tool is being offered via “underground affiliate networks” with attackers being financially incentivized to spread the malicious software through infected torrent files.

“Members of these networks are invited by special invitation only, with strict verification of each new member,” the company reports.

InfoArmor says that the attackers’ infrastructure has a monitoring system in place which allows them to track the latest trends in downloading, presumably so that attacks can reach the greatest numbers of victims.

“The bad actors have analyzed trends on video, audio, software and other digital content downloads from around the globe and have created seeds on famous torrent trackers using weaponized torrents packaged with malicious code,” they explain.

RAUM instances were associated with a range of malware including CryptXXX, CTB-Locker and Cerber, online-banking Trojan Dridex and password stealing spyware Pony.

“We have identified in excess of 1,639,000 records collected in the past few months from the infected victims with various credentials to online-services, gaming, social media, corporate resources and exfiltrated data from the uncovered network,” InfoArmor reveals.

What is perhaps most interesting about InfoArmor’s research is how it shines light on the operation of RAUM behind the scenes. The company has published a screenshot which claims to show the system’s dashboard, featuring infected torrents on several sites, a ‘fake’ Pirate Bay site in particular. “Threat actors were systematically monitoring the status of the created malicious seeds on famous torrent trackers such as The Pirate Bay, ExtraTorrent and many others,” the researchers write.

“In some cases, they were specifically looking for compromised accounts of other users on these online communities that were extracted from botnet logs in order to use them for new seeds on behalf of the affected victims without their knowledge, thus increasing the reputation of the uploaded files.” 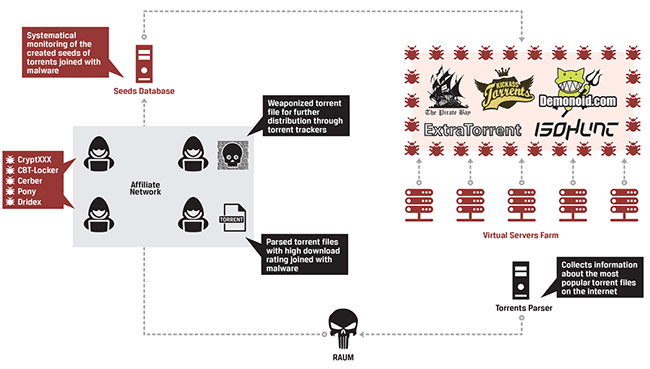 According to InfoArmor the malware was initially spread using uTorrent, although any client could have done the job. More recently, however, new seeds have been served through online servers and some hacked devices.

In some cases the malicious files continued to be seeded for more than 1.5 months. Tests by TF on the sample provided showed that most of the files listed have now been removed by the sites in question.

Completely unsurprisingly, people who use torrent sites to obtain software and games (as opposed to video and music files) are those most likely to come into contact with RAUM and associated malware. As the image below shows, Windows 7 and 10 packs and their activators feature prominently.

“All of the created malicious seeds were monitored by cybercriminals in order to prevent early detection by [anti-virus software] and had different statuses such as ‘closed,’ ‘alive,’ and ‘detected by antivirus.’ Some of the identified elements of their infrastructure were hosted in the TOR network,” InfoArmor explains.

The researchers say that RAUM is a tool used by an Eastern European organized crime group known as Black Team. They also report several URLs and IP addresses from where the team operates. We won’t publish them here but it’s of some comfort to know that between Chrome, Firefox and MalwareBytes protection, all were successfully blocked on our test machine.

InfoArmor concludes by warning users to exercise extreme caution when downloading pirated digital content. We’d go a step further and advise people to be wary of installing all software from any untrusted sources, no matter where they’re found online.

from TorrentFreak http://ift.tt/2coeJE0
via IFTTT
Posted by papampi at 3:26 AM