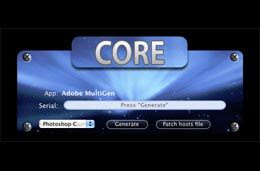 Those who prefer to pirate rather than pay for their software often face installation issues. These range from the very simple to the fairly complex, depending on the strength of the anti-piracy technology deployed by manufacturers.

At the lower end of the scale, users are sometimes required to input a fake serial number into their software. This is achieved by running a key generator or “keygen”, a tool bundled with a pirate release by the team who cracked it.

This is often straightforward but for users of the macOS Sierra, the latest update to the Mac operating system currently being rolled out by Apple, things are proving problematic.

When people try to run keygens and cracks that are bundled with many Mac pirate software releases, the tools break and offer the following error report.

According to Mac Kung Fu, it is keygens’ reliance on a free multiplatform executable packer that is causing the issues.

“[The problem] occurs because the creators of the hacks and keygens use the popular open source UPX app to package their code but subsequently attempt to cover their tracks by erasing any mention of the app, including the vital markers to compressed data. This confuses macOS Sierra, causing the error,” the report notes.

Searches on popular torrent sites do indeed reveal a fairly widespread problem. In particular, there are many complaints noted by users of keygens published by popular piracy release group CORE. 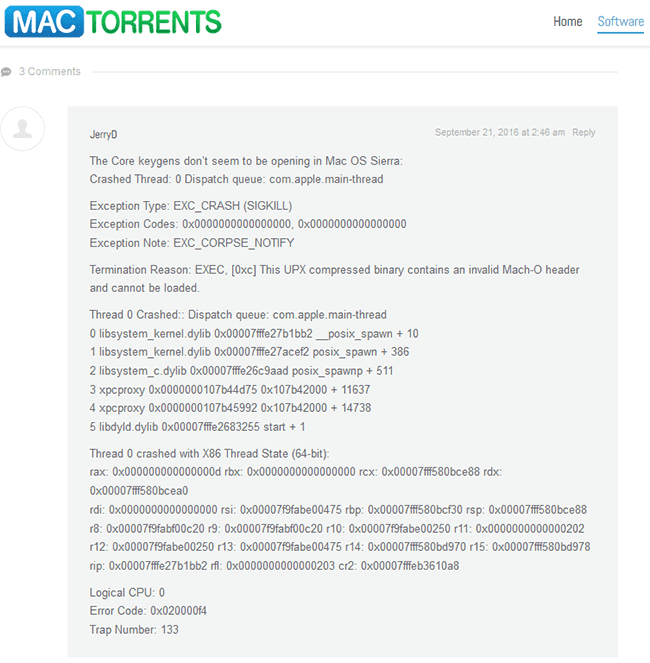 Several users commenting on CORE releases that have been uploaded to The Pirate Bay are reporting similar issues but the problems aren’t isolated in English-speaking areas. As suggested by the image below, the problem is widespread. 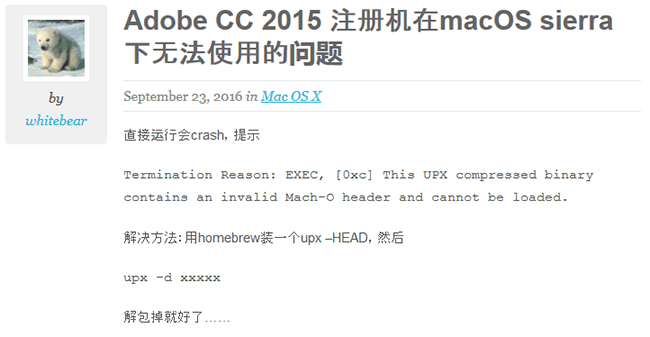 UPX’s developers have been made aware of the issues since they affect more than just keygens and cracks. It’s reported that v3.92 of UPX will address the problem.

However, that won’t fix the broken keygens and cracks already available online. People who have already upgraded to MacOS Sierra will find that these tools won’t work, effectively taking that pirate software out of the marketplace for them.

But of course, pirates are an ingenious bunch and the thirst for free software is a great motivator. That has already prompted a user called zerocoolroot to find a fix, which reportedly works. from TorrentFreak http://ift.tt/2cEOgk9
via IFTTT
Posted by papampi at 2:08 AM