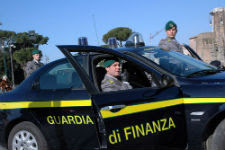 Anti-piracy operations come in all shapes and sizes but it’s movies, music and TV shows that grab the majority of the headlines. Games, software, and eBooks trail closely behind, but it’s rare that other types of digital print see enforcement action.

Italy, one of the most aggressive countries when it comes to sweeping anti-piracy actions, has just changed all that with one of the largest enforcement operations ever seen in the publishing niche.

Following an investigation carried by rightsholders and the Public Prosecutor of Rome, a total of 50 domains involved in the unlawful distribution of news and magazine content have been seized by the country’s Special Unit for Broadcasting and Publishing.

According to an announcement by the authorities, all of the sites have now gone dark after offering “vast quantities” of material originally published by major newspapers and periodicals including Cosmopolitan, Fashion Magazine, and Vanity Fair.

The operation, dubbed “Odyssey 2”, was carried out under the directives of the Special Command Units of the Guardia di Finanza, a militarized police force under the authority of the Minister of Economy and Finance.

Fulvio Sarzana, a lawyer with the Sarzana and Partners who specializes in Internet and copyright disputes, says that the sites were probably under the control of separate entities.

“The variety of sites and the diversity of hosting and domain registrations leads me to think that these are different cases,” Sarzana informs TorrentFreak.

“The methods vary but generally the digital kiosks work this way; someone buys the paper or digital versions of newspapers through a duly registered account and then makes them available on the website.”

Until now, Italy has employed the same “follow-the-money” approach used by authorities in other jurisdictions, whereby site owners are identified via payments made by advertisers and similar business partners. Now, however, it claims to have developed a ‘new’ “follow-the-hosting” approach, which allows it to identify site operators, even when they use Cloudflare to hide the location of their servers.

While details on the techniques used by the authorities are thin, uncloaking server locations in this way is nothing new and can be achieved when Cloudflare is ordered to do so by a competent court.

The sites in question, which were not named by the authorities, are said to have served millions of users with pirated content. This, to a background of national media groups losing a third of their turnover over the past five years.

Big anti-piracy operations to protect publishers are extremely rare but with their market closing in and ad revenues falling, more could certainly follow in the future.

from TorrentFreak http://ift.tt/2kfFdZc
via IFTTT
Posted by papampi at 12:47 AM