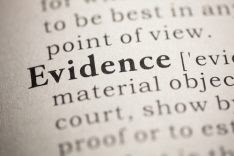 As the most active copyright litigant in the United States, adult entertainment outfit Malibu Media has been subjected to these allegations as well.

The company, widely known for its popular “X-Art” brand, has gone after thousands of alleged offenders in recent years earning millions of dollars in the process. While many of its targets eventually pay up, now and then the company faces fierce resistance.

This is also true in the case Malibu launched against the Californian Internet subscriber behind the IP-address 76.126.99.126. This defendant has put up quite a fight in recent months and invested some healthy resources into it.

A few days ago, the defendant’s lawyer submitted a motion (pdf) for summary judgment, pointing out several flaws in the rightsholder’s complaint. While this kind of pushback is not new, the John Doe backed them up with a very detailed expert report.

The 74-page report provides an overview of the weaknesses in Malibu’s claims and the company’s evidence. It was put together by Bradley Witteman, an outside expert who previously worked as Senior Director Product Management at BitTorrent Inc.

In common with other aspects, Malibu’s file-sharing evidence was also carefully inspected. Like many other rightsholders, the adult company teamed up with the German outfit Excipio which collects data through its custom monitoring technology.

According to Witteman’s expert analysis, the output of this torrent tracking system is unreliable.

One of the major complaints is that the tracking system only takes 16k blocks from the target IP addresses, not the entire file. This means that they can’t prove that the defendant actually downloaded a full copy of the infringing work. In addition, they can’t do a proper hash comparison to verify the contents of the file.

From the expert report 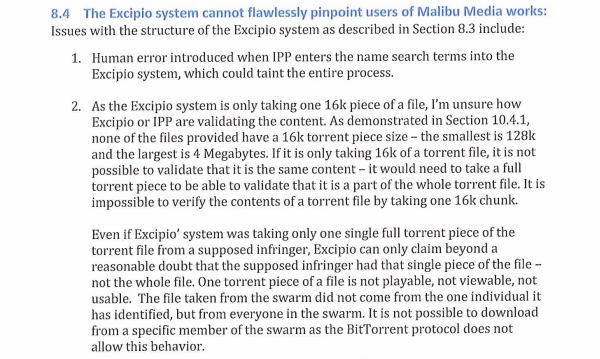 That’s only part of the problem, as Mr. Witteman lists a range of possible issues in his conclusions, arguing that the reliability of the system can’t be guaranteed.

In addition to the technical evidence, the expert report also sums up a wide range of other flaws.

Many files differ from the one’s deposited at the Copyright Office, for example, and the X-Art videos themselves don’t display a proper copyright notice. On top of that, Malibu also made no effort to protect its content with DRM.

Based on the expert review the John Doe asks the court to rule in his favor. Malibu is not a regular rightsholder, the lawyer argues, but an outfit that’s trying to generate profits through unreliable copyright infringement accusations.

“The only conclusion one can draw is that Malibu does not operate like a normal studio – make films and charge for them. Instead Malibu makes a large chunk of its money using unreliable bittorrent monitoring software which only collects a deminimus amount of data,” the Doe’s lawyer writes.

Stepping it up a notch, the lawyer likens Malibu’s operation to Prenda Law, whose principals were recently indicted and charged with conspiracy to commit fraud, money laundering, and perjury by the US Government.

“Malibu is no different than ‘Prenda Law’ in form and function. They cleverly exploit the fact that most people will settle for 5-10K when sued despite the fact that the system used to ‘capture’ their IP address is neither robust nor valid,” the motion reads.

Whether the court will agree has yet to be seen, but it’s clear that the expert report can be used as a new weapon to combat these and other copyright infringement claims.

Of course, one has to keep in mind that there are always two sides to a story.

At the same time the John Doe submitted his motion, Malibu moved ahead with a motion (pdf) for sanctions and a default judgment. The adult entertainment outfit argues that the defendant destroyed evidence on hard drives, concealed information, and committed perjury on several occasions.

from TorrentFreak http://ift.tt/2lxMrae
via IFTTT
Posted by papampi at 1:04 PM