HBO Goes After ‘Online’ Pirates in the Caribbean

HBO’s daughter company in Latin America, HBO LA, is not happy with the rampant piracy that’s taking place in the Caribbean.

Earlier this month the company submitted its latest 301 ‘watch list’ submission to the U.S. Government, urging the authorities to take appropriate action.

HBO is steadily expanding its services to the Caribbean and Central American regions. However, their efforts to roll out legitimate services are frustrated by local pirates. These aren’t just individual pirates, large cable operators are in on it too.

“…a lack of enforcement by Caribbean and Central American governments is allowing local cable operators to build substantial enterprise value by increasing their subscriber base through offering pirated content,” HBO LA writes (pdf).

The same goes for hotels, which treat their visitors to prime HBO programming without paying a proper license.

“In addition to piracy by large cable providers, non-U.S. owned hotel chains on a variety of islands are known to pirate content exclusively licensed to HBO LA by using their own onsite facilities or obtaining service from cable operators who pirate,” HBO LA informs the government.

Piracy by cable operators and hotels is not new. HBO has reported these issues to the authorities before, but thus far little has changed. In the meantime, however, the company has started to notice another worrying trend.

Online piracy has started to become more prevalent, with many stores now selling IPTV boxes and other devices that allow users to access HBO content without permission.

“In the past year, HBO LA continued to see a significant increase in the problem of online piracy of its service throughout all of HBO LA’s territory,” HBO LA writes.

“In the Caribbean, several brick-and-mortar stores customarily sell Roku or generic Android set-top devices (like the Mag250, Avov, and the MXIII) preinstalled with an unlicensed streaming service and offering a few hundred channels of content, including content for which HBO LA holds exclusive license in the territory.” 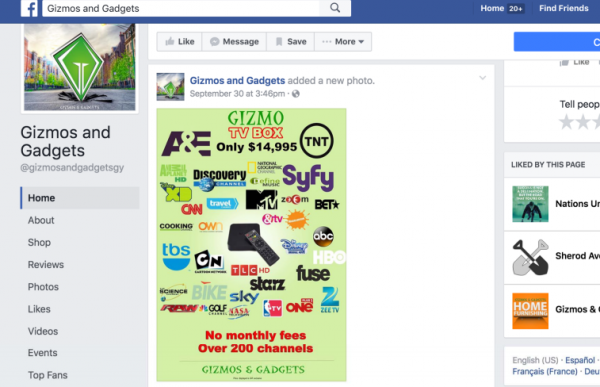 The company lists various examples of stores that offer these kinds of products including the Gizmos and Gadgets Electronics store in Guyana. This store sells Roku devices with an unlicensed streaming service called “ROKU TV” pre-installed.

By selling “pirate” subscriptions to thousands of customers the company is making over a million dollars per year, HBO estimates. And more recently the same store started to sell a subscription-less service as well.

“Additionally, Gizmos and Gadgets Electronics has recently started offering a second integrated hardware and service device known as the Gizmo TV BOX, which offers over 200 channels with no monthly fee,” HBO LA writes.

This is just one example of the many that are listed by the Latin American daughter of HBO.

The cable provider says it’s already taken various steps to stop the different types of infringements but hopes that U.S. authorities will help out where local governments fail. Towards the end of their submission, HBO LA encourages the United States Trade Representative to apply appropriate pressure and threats, to turn the tide.

from TorrentFreak http://ift.tt/2lQWKd4
via IFTTT
Posted by papampi at 9:33 AM