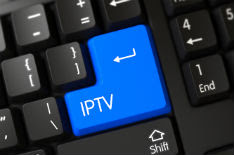 Increasingly people are trading in expensive cable subscriptions for cheaper or free Internet TV. However, ideally they would still like to enjoy this from the comfort of their living room.

In recent years this has become much more convenient with help from a variety of easy-to-use media players, Kodi boxes included.

Following this trend, there has also been an uptick in the availability of unlicensed TV streams, with vendors offering virtually any channel imaginable, for free or in exchange for a small fee.

Rightholders are not happy with this development and are actively cracking down on sellers of these illicit services and devices. This is also what happened yesterday in Malaga, Spain, where local ISP Y-Internet was raided.

The police action was carried out following a complaint from the UK football organization Premier League, with assistance from anti-piracy outfit Irdeto. While the company’s website doesn’t list any IPTV offers, the provider allegedly offered piracy-configured IPTV devices on the side for a hefty annual fee of €450.

While it’s not mentioned by the police, TF discovered that the ISP also has ties to a company that offers an IPTV service with UK and Irish TV & radio channels. The website in question was online at the time of the raid, but is now “undergoing maintenance.”

Y-Internet itself is a well-known business in the Costa Del Sol region according to several online sources. The Spanish Government officially licensed the company’s Internet services, and the ISP is said to serve 300,000 homes and businesses, including many UK expats.

During the raid, five company employees were present in the store, but it’s unclear if any arrests were made. Whether the company’s regular Internet subscribers were affected by the action is also unknown.

While details remain scarce, police did release a video of the raid showing several pieces of hardware and network equipment.

The UK owners of the ISP were not present in the store at the time of the raid. They reportedly observed their employees from overseas and tried to destroy files, payment transactions, and clients’ records when the police action began.

However, the police reportedly stopped them before they could permanently erase any critical evidence.

The Premier League is happy with the result and notes that this is the second success in a short period. Just a few weeks ago a UK supplier of piracy-configured IPTV boxes was sentenced to four years in prison.

“The raids conducted by the Spanish authorities, supported in this case by Irdeto’s expertise, are a positive example of law enforcement taking seriously piracy and IP infringement,” says Kevin Plumb, Premier League Director of Legal Services

“This approach is essential for organizations like the Premier League – and other creative industries – as our model is predicated on the ability to market and sell rights and protect intellectual property. It is because of this that clubs can invest in star players and managers, and world class stadiums – the very things fans enjoy about our competition.”

Or as the Spanish Police put it: One goal against Piracy… from TorrentFreak http://ift.tt/2kz45Nf
via IFTTT
Posted by papampi at 12:14 AM