For most police departments, online piracy has no priority, but in recent years City of London Police have made copyright infringement one of their main targets.

In September 2013, the Police Intellectual Property Crime Unit (PIPCU) was founded, marking the start of a broad enforcement campaign to decrease traffic to online pirate sites.

To achieve this goal PIPCU has targeted hosting services, advertisers and payment processors, asking them to cut ties with allegedly infringing sites. In addition, police also sent out warning letters to pirate site owners directly, asking them to go legit or shut down.

In recent years, hundreds of sites have been approached. This week it appears that another batch of letters was sent out which, compared to earlier versions, are extended with added references to UK legislation and increased threats.

One of the websites that was targeted is DNJ.to (DailyNewJams), a music portal that allows users to stream and download a wide variety of tracks.

In their letter, PIPCU accuses the site of facilitating copyright infringement. They state that the operator may be liable to prosecution for conspiracy to defraud, offences under the Fraud Act, the Copyright, Design & Patents Act, as well as the Serious Crime Act.

“Should a conviction be brought for the above offences, UK courts may impose sentences of imprisonment and/or fines,” the letter reads, adding that “PIPCU has criminal and civil powers in UK law to seize money, belongings and any property in connection with these offences.” 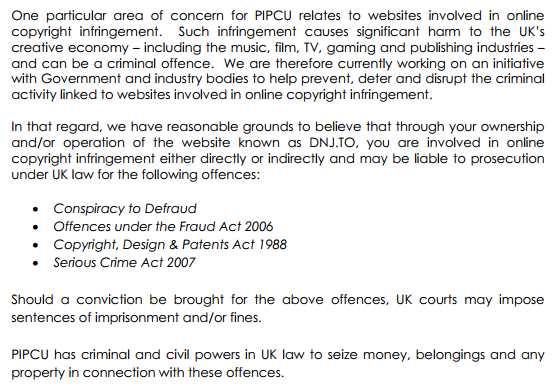 The new letter, which comes in the form of a flashy PDF, also references a recent ruling from the European Court of Justice, which clarified that knowingly linking to infringing material for profit is against the law.

PIPCU suggests that DNJ.to is making copyright-infringing material available with a profit motive, and urges the site to stop doing so. If no action is taken in a few weeks, they may become subject to various enforcement efforts.

“If no contact is made before 3rd February 2017, then you and/or the DNJ.TO website may face further police action. This may include steps to disrupt revenue made from advertisements and/or payment services; alongside internet infrastructure disruption,” PIPCU writes.

TorrentFreak spoke to one of the people behind DNJ.to, who doesn’t appear to be impressed by the threatening language. Since the site has no direct ties with the UK, they plan to disregard the letter.

“They accuse us of breaking the UK Law but we have no relation to the UK nor do any of us live there. We don’t even try to actively drive UK traffic to the blog. In fact we completely don’t care about the UK,” DNJ.to’s operator says.

The various enforcement threats also fail to make an impact. While PIPCU had some success in convincing advertising networks to ban ‘pirate’ sites, there are many lined up who are still eager to take the traffic.

Similarly, there are also plenty of webhosting providers who are more than happy to service these type of sites as long as they pay, despite the enforcement efforts from PIPCU and others.

“It’s not like they haven’t already been trying this for years. Is it working? Nope, its not. Did they ever take a look how many new advertising companies are opening every month? They would be happy if PIPCU would close some of the big [advertising networks].

“We get like five advertising offers a week from ad networks who beg us to join them. There are tons of hosting providers who absolutely don’t care about so-called ‘copyright infringement’,” DNJ.to’s operator adds.

Of course, this doesn’t mean that the letters are entirely useless.

It’s certainly possible that some smaller sites that will fold when facing PIPCU’s strong language. However, it’s clear that DNJ.to plans to keep its site running as usual.

A full copy of PIPCU’s letter is available here (pdf).

from TorrentFreak http://ift.tt/2jL1Aro
via IFTTT
Posted by papampi at 3:03 AM