Last year Paramount Pictures and CBS Studios filed a lawsuit against the makers of a Star Trek inspired fan film, accusing them of copyright infringement.

The case, which centers around the well-received short film Star Trek: Prelude to Axanar and the planned follow-up feature film Axanar, goes to trial later this month.

In a pre-trial order earlier this month the court decided that the fan-film is not entitled to a fair use defense. In addition, it found that there is an objective substantial similarity between the fan-film and the original Star Trek works.

While no ruling was made on individual items such as the Klingon language, costumes, characters or species, as a whole the overall look and feel was found to be substantially similar.

This was disappointing for the makers of the fan film, but in a subsequent order this week there was also some good news. In particular for those who feared for the future of the Klingon language.

The court tentatively granted a motion (pdf) from the Axanar team to preclude evidence that is unoriginal, in the public domain or owned by third parties. This motion specifically included the Klingon language, which now can’t be brought up at trial.

The news is welcomed by the Language Creation Society (LCS), a non-profit that promotes the art and craft of language creation.

LCS openly protested Paramount’s copyright claim over the Klingon language in recent months. They also tried to get officially involved in the case by filing an amicus brief and reply, which both used fierce Klingon statements throughout.

The language is a tool for people to communicate and express ideas, something people should be allowed to do freely under U.S. law, LCS argued. 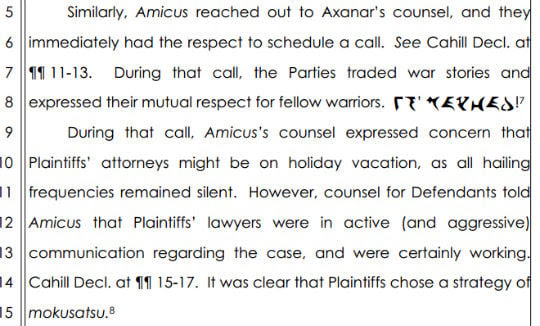 Paramount disagreed and the court decided that LCS was not allowed to file their motion because the issue was moot. Looking back, however, LCS believes that their efforts did make an impact.

“We used Klingon in our brief to show that Klingon is a living language that anyone should be able to use without Paramount’s permission,” LCS notes.

“It also serves a real purpose beyond this one case. IP law can be dry and technical. The use of Klingon — and humor — helped spread our point that languages are not copyrightable.”

The good news for Klingons and their fans is that, while Paramount still claims ownership, there are no additional roadblocks to use the language. And without an order stating that Paramount has exclusive rights over the language’s use, LCS and others will continue to spread it.

In fact, the legal battle actually helped it to grow and evolve. After several decades, the name Paramount now finally has a Klingon translation: pa’ra’mon.

“We have not sought, nor do we need, any permission from Paramount for our use of Klingon — not even when we have created a new Klingon name for Paramount itself:

from TorrentFreak http://ift.tt/2jNMQse
via IFTTT
Posted by papampi at 3:00 PM