President Trump Told That Strong Copyright Laws Are in His Interest 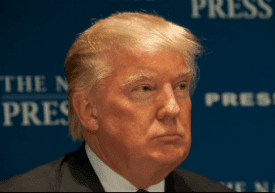 On Friday January 20, Donald J. Trump was inaugurated as the 45th President of the United States after one of the most controversial election campaigns of modern times.

For those who watched the historic inauguration, the message from the new president was clear.

From now on and even at the expense of outsiders, America will come first. Time and time again the president reiterated that the power would be put back into the hands of the people to “Make America Great Again.”

With vows to boost America’s economy by supporting local businesses ringing loud, President Trump has now received a letter from a powerful group hoping that their interests will receive a boost from his incoming policies.

The Copyright Alliance, which claims to represent 1.8 million creators and 13,000 pro-copyright organizations in the United States, begin by reminding the President that they’re already on the very same page.

“Throughout the long history of our country, few, if any, Presidents have had a more sizable and diverse copyright portfolio than you,” CEO Keith Kupferschmid writes.

“Your experiences as a businessman have afforded you insights into the value and importance of copyright and how copyright protections help drive the U.S. economy and create millions of well-paying jobs and small businesses.”

With the RIAA, MPAA and 3,000 music publishers as members, the Copyright Alliance believes that its sheer horsepower should be enough to grab the President’s attention, particularly alongside reminders that in 2015 the copyright industries’ 5.5 million workers added $1.2 trillion to the US GDP.

“The growth within core copyright industries far surpasses the average growth rate for other industries; in fact, between 2012 and 2015, those industries grew at a rate of more than 127% greater than the remainder of the economy,” Kupferschmid notes.

But this huge contribution to the economy doesn’t exist in a vacuum, the Alliance adds. It only works thanks to a strong copyright system that rewards creativity and discourages piracy, which in turn is good for the economy and indeed, President Trump himself.

“You, as an author and holder of numerous copyrighted works, know first-hand that creators rely on copyright law for their livelihood and careers, and they are harmed when the system fails to adequately protect their valuable creations in the United States and abroad,” Kupferschmid adds.

Noting that piracy in the Internet age has an adverse effect on U.S companies and the economy as a whole, the Copyright Alliance says that stronger copyright law boosts culture and as a result supports Trump’s mission to ‘Make America Great Again.’

“We need to enhance the protections afforded to the creative communities, not dilute them. We hope you will support a strong and vibrant copyright system in the United States that protects copyright holders from online theft and ensures that creators share in the massive profits being made by internet platforms from these copyrighted works,” the Alliance concludes.

While the Copyright Alliance certainly expects action against mainly overseas ‘pirate’ sites, the use of the word “share” in the above paragraph suggests companies a little closer to home. Google’s YouTube, for example, that stands accused by the music industry of “gaming” the safe harbor provisions of the DMCA.

When compared to the outgoing Democrats, Hollywood in particular has a less than great relationship with President Trump. Nevertheless, Trump will be acutely aware of the contributions made by the creative industries as a whole and how largely overseas websites have some capacity to undermine that.

Only time will tell how America’s new President will respond, but keeping in mind his promise to always put the United States first, the next report from the USTR has the potential to be quite a read. Will it maintain the status quo? Or will it serve as a shot across the bows of countries who dare to undermine the US economy? Stay tuned.

from TorrentFreak http://ift.tt/2jYhJtW
via IFTTT
Posted by papampi at 6:30 AM