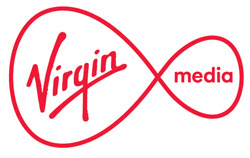 While other providers in the UK and Ireland aim to compete, those requiring the absolute fastest fibre optic broadband coupled with a comprehensive TV package will probably find themselves considering Virgin Media.

Despite sporting Richard Branson’s Virgin brand, the company has been owned by US-based Liberty Global since 2013. It previously earned the title of first quad-play media company in the United Kingdom, offering broadband, TV, fixed-line and mobile telecoms packages.

Today, however, the company has a small piracy-related embarrassment to address.

Like several of the large telecoms companies in the region, Virgin Media operates a number of bricks-and-mortar stores which are used to drum up sales for Internet, TV and phone packages while offering support to new and existing customers. They typically look like the one in the image below. 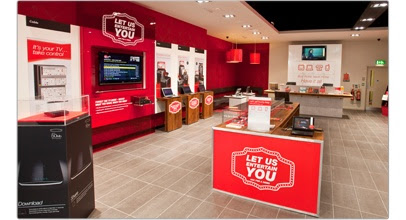 The outside windows of Virgin stores are usually covered with advertising for the companies products and regularly carry digital displays which present the latest deals. However, one such display spotted by a passer-by carried a little extra.

In a now-deleted post on Reddit, a user explained that when out and about he’d passed a Virgin Media store which sported a digital display advertising the company’s impressive “Full House” package. However, intruding at the top of the screen was a notification from one of the most impressive piracy apps available today, Terrarium TV. 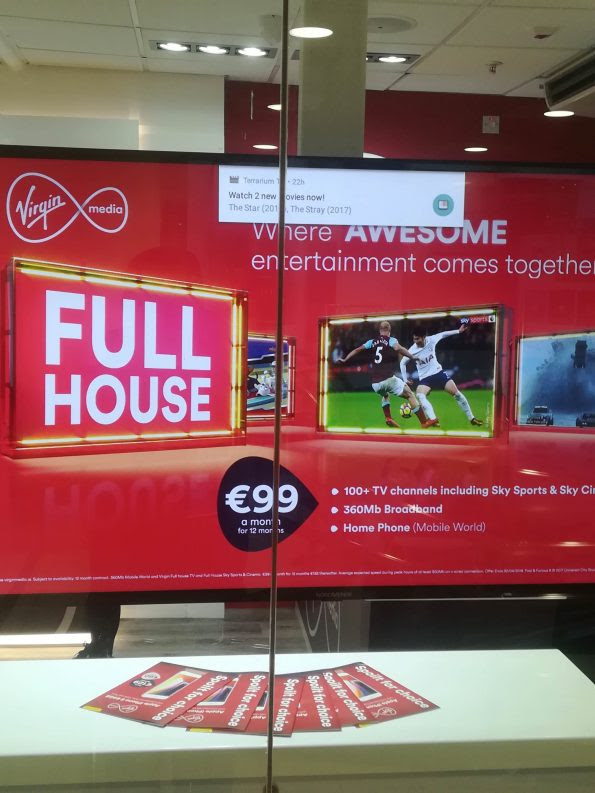 For those out of the loop, Terrarium TV is one of the most impressive Android-based applications available today. For reasons that aren’t exactly clear, it hasn’t received the attention of ‘rivals’ such as Popcorn Time and Showbox but its abilities are extremely impressive.

As the image shows, the notification is letting the user know that two new movies – The Star and The Stray – have been added to Terrarium’s repertoire. In other words, they’ve just been listed in the Terrarium app for streaming directly to the user’s installation (in this case one of Virgin’s own displays) for free, without permission from copyright holders.

Of course, Virgin Media definitely won’t have authorized the installation of Terrarium TV on any of its units, so it’s most likely down to someone in the store with access to the display, perhaps a staff member but possibly a mischievous customer. Whoever it is should probably uninstall it now, if they’re able to. Virgin will not be happy about this.

The person who took the photo didn’t respond to TorrentFreak’s request for comment on where it was taken but from the information available in the image, it seems likely that it’s in Ireland. Virgin Media ads elsewhere in the region are priced in pounds – not in euros – so a retail outlet in the country is the most likely location. The same 99 euro “Full House” deal is also advertised on Virgin’s .ie website. While a display running a piracy application over the top of an advert trying to sell premium access to movies and TV shows is embarrassing enough, Virgin and other ISPs including Eircom, Sky Ireland, and Vodafone Ireland are currently subject to a court order which compels them to block several pirate sites in Ireland.

The sources used by Terrarium to supply illicit copies of movies are not part of that order but since ISPs in the region don’t contest blocking orders when rightsholders apply for them, it’s reasonable to presume they’re broadly in favor of blocking pirate sites.

Of course, that makes perfect sense if you’re a company trying to make money from selling premium access to content.

from TorrentFreak http://ift.tt/2nLgZb9
via IFTTT
Posted by papampi at 1:52 AM