With many thousands of movies and TV shows being made available illegally online every year, a significant number will be enjoyed by speakers of languages other than that presented in the original production.

When Hollywood blockbusters appear online, small armies of individuals around the world spring into action, translating the dialog into Chinese and Czech, Dutch and Danish, French and Farsi, Russian and Romanian, plus a dozen languages in between. TV shows, particularly those produced in the US, get the same immediate treatment.

For many years, subtitling (‘fansubbing’) communities have provided an incredible service to citizens around the globe, from those seeking to experience new culture and languages to the hard of hearing and profoundly deaf. Now, following in the footsteps of movies like TPB:AFK and Kim Dotcom: Caught in the Web, a new movie has premiered in Italy which celebrates this extraordinary movement.

Subs Heroes from writer and director Franco Dipietro hit cinemas at the end of January. It documents the contribution fansubbing has made to Italian culture in a country that under fascism in 1934 banned the use of foreign languages in films, books, newspapers and everyday speech.

The movie centers on the large subtitle site ItalianSubs.net. Founded by a group of teenagers in 2006, it is now run by a team of men and women who maintain their identities as regular citizens during the day but transform into “superheroes of fansubbing” at night.

Needless to say, not everyone is pleased with this depiction of the people behind the now-infamous 500,000 member site.

For many years, fansubbing attracted very little heat but over time anti-piracy groups have been turning up the pressure, accusing subtitling teams of fueling piracy. This notion is shared by local anti-piracy outfit FAPAV (Federation for the Protection of Audiovisual and Multimedia Content), which has accused Dipietro’s movie of glamorizing criminal activity.

In a statement following the release of Subs Heroes, FAPAV made its position crystal clear: sites like ItalianSubs do not contribute to the development of the audiovisual market in Italy.

“It is necessary to clarify: when a protected work is subtitled and there is no right to do so, a crime is committed,” the anti-piracy group says.

“[Italiansubs] translates and makes available subtitles of audiovisual works (films and television series) in many cases not yet distributed on the Italian market. All this without having requested the consent of the rights holders. Ergo the Italiansubs community is illegal.” 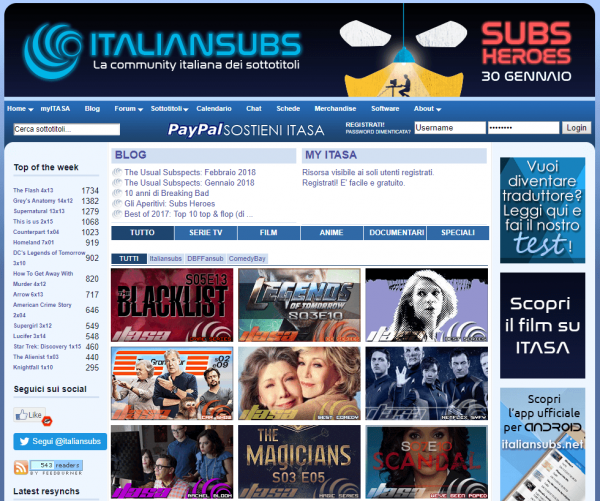 FAPAV General Secretary Federico Bagnoli Rossi says that the impact that fansubbers have on the market is significant, causing damage not only to companies distributing the content but also to those who invest in official translations.

The fact that fansubbers often translate content that is not yet available in the region only compounds matters, Rossi says, noting that unofficial translations can also have “direct consequences” on those who have language dubbing as an occupation.

“The audiovisual market today needs to be supported and the protection and fight against illicit behaviors are as fundamental as investments and creative ideas,” Rossi notes.

“Everyone must do their part, respecting the rules and with a competitive and global cultural vision. There are no ‘superheroes’ or noble goals behind piracy, but only great damage to the audiovisual sector and all its workers.”

Also piling on the criticism is the chief of the National Cinema Exhibitors’ Association, who wrote to all of the companies involved to remind them that unauthorized subtitling is a crime. According to local reports, there seems to be an underlying tone that people should avoid becoming associated with the movie.

This did not please director Franco Dipietro who is defending his right to document the fansubbing movement, whether the industry likes it or not.

“We invite those who perhaps think differently to deepen the discussion and maybe organize an event to talk about it together. The film is made to confront and talk about a phenomenon that, whether we like it or not, exists and we can not pretend that it is not there,” Dipietro concludes.

from TorrentFreak http://ift.tt/2CsCwL7
via IFTTT
Posted by papampi at 4:02 AM