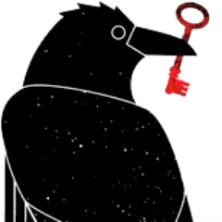 While Sci-Hub is praised by thousands of researchers and academics around the world, copyright holders are doing everything in their power to wipe the site from the web.

Soon after the order was signed, several of Sci-Hub’s domain names became unreachable as domain registries complied with the court order. This resulted in a domain name whack-a-mole, but all this time Sci-Hub remained available.

Last weekend another problem appeared for Sci-Hub. This time ACS went after CDN provider Cloudflare, which informed the site that a court order requires the company to disconnect several domain names.

“Cloudflare has received the attached court order, Case 1:17-cv-OO726-LMB-JFA,” the company writes. “Cloudflare will terminate your service for the following domains sci-hub.la, sci-hub.tv, and sci-hub.tw by disabling our authoritative DNS in 24 hours.”

According to Sci-Hub’s operator, losing access to Cloudflare is not “critical,” but it may “cause a short pause in website operation.” 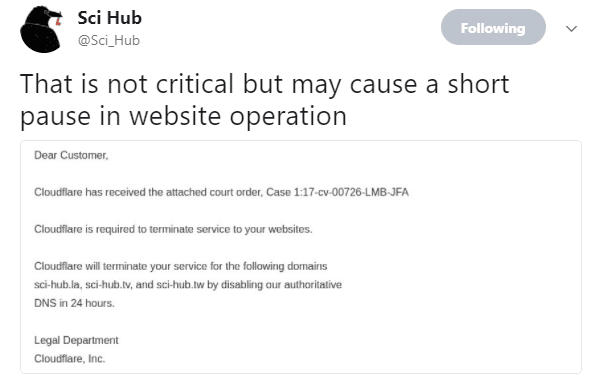 Cloudflare’s actions are significant because the company previously protested a similar order. When the RIAA used the permanent injunction in the MP3Skull case to compel Cloudflare to disconnect the site, the CDN provider refused.

In the Sci-Hub case “active concert or participation” is also a requirement for the injunction to apply. While it specifically mentions ISPs and search engines, ACS Director Glenn Ruskin previously stressed that companies won’t be targeted for simply linking users to Sci-Hub.

“The court’s affirmative ruling does not apply to search engines writ large, but only to those entities who have been in active concert or participation with Sci-Hub, such as websites that host ACS content stolen by Sci-Hub,” Ruskin told us at the time.

Cloudflare does more than linking of course, but the company doesn’t see itself as a web hosting service either. While it still may not agree with the “active concert” classification, there’s no evidence that Cloudflare objected in court this time.

As for Sci-Hub, they have to look elsewhere if they want another CDN provider. For now, however, the site remains widely available.

from TorrentFreak http://ift.tt/2se3xlO
via IFTTT
Posted by papampi at 9:03 AM