Will Reddit’s /r/Piracy Sub-Reddit Get Shut Down? 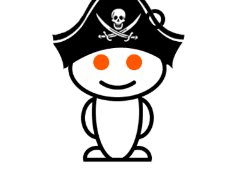 To millions of loyal users, Reddit is one of the Internet’s most valuable resources. The platform covers every subject one can think of, plus hundreds that have never entered mainstream consciousness.

Along with fairly benign topics such as news, health, beauty and sport, Reddit caters to those whose hobbies and interests are a little more controversial. Dozens of so-called sub-Reddits are dedicated to most aspects of piracy, for example, something that has landed a few of them in hot water.

Take the /r/megalinks sub-Reddit, for example. Last year the discussion forum was shut down in a blaze of bad publicity after the site accumulated enough ‘strikes’ to trigger Reddit’s repeat infringer policy.

Megalinks was a very good example of sub-Reddit simply waiting to be closed down. The entire purpose of the community was to post links to infringing content stored on file-hosting site MEGA. No pirated content was off-limits so when Reddit’s admins decided enough was enough, it was no surprise to see the sub disappear down the drain.

This week, another piracy-focused sub-Reddit found itself disappearing into history. The /r/crackedsoftware forum, which (surprise, surprise) dedicated itself to links to pirated software, also found itself banished by Reddit’s admins. As the image below shows, it too fell foul of Reddit’s ‘repeat infringer’ policy.

No surprise the banhammer came out for this one 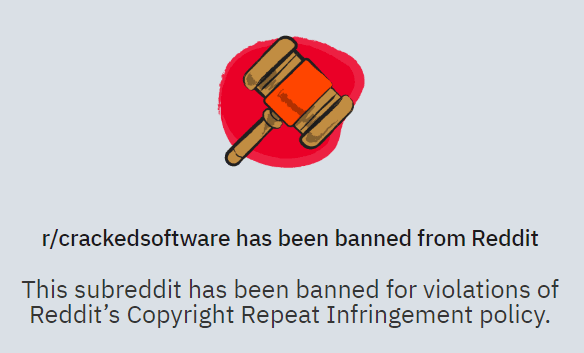 With news of these bannings filtering through to other sections of Reddit dedicated to piracy, some users have been asking whether they too could be banished to the digital wilderness. The question has been asked several times on /r/piracy, a sub with more than 244,000 subscribers. So, is it at risk?

To answer that question it’s first necessary to differentiate between sub-Reddits that act as a platform for piracy and those that discuss piracy but do not engage in it, on Reddit itself.

There can be no doubt that /r/megalinks and /r/crackedsoftware fall into the first category. Both sub-Reddits were designed to encourage and then provide access to links to known infringing content. Or, to put it another way, these sub-Reddits acted like The Pirate Bay or any other intentional ‘pirate’ linking site.

While this in itself would probably be enough to put the subs on the wrong side of the law, Reddit only appears to take action against subs when they cause documented copyright infringement problems for the platform. If a sub-Reddit receives repeat complaints from copyright holders, Reddit – as is required under the DMCA – invokes its repeat infringer policy.

At Reddit’s discretion, that repeat infringer policy can be acted upon in two ways. Firstly, Reddit could determine that a particular user is at fault and since he or she is continually posting infringing content, they could be banned. However, if the problem “pervades a whole community“, the entire sub will be banned if it doesn’t clean up its act. Clearly, both Megalinks and CrackedSoftware fall into this category, hence their demise.

Now, compare these two now-defunct subs to /r/piracy, Reddit’s flagship piracy forum with close to 245,000 users. While the sub is no doubt inhabited by many thousands of pirates, its moderators have put in place a set of clear rules to ensure that their home isn’t shut down in the same way as some others.

The sub only has four rules, three of which are dedicated to keeping the discussion both tidy and on topic. However, rule three is the sub’s most important, despite being a single line long. To be sure, however, the point is repeated and rephrased.

It is this rule (and its enforcement by the sub’s moderators) that ensures that /r/piracy does not often find itself mentioned in DMCA notices sent to Reddit. If there are no links to infringing content, copyright holders can’t send a valid DMCA notice and Reddit will not be required to invoke its repeat infringer policy.

Advice from Reddit to keep a piracy-focused sub in shape

Of course, even the most fastidious of moderation teams can accidentally let something infringing slip through the net (even mods have to sleep), meaning that it’s still possible for an infringing post or comment to appear on /r/piracy. However, that is not the forum’s main aim, something which seems to go a long way with Reddit’s admins.

There are threats to the sub, however. A minority of users, many of whom simply can’t be bothered to read the rules and/or stick to them, are the number one concern.

While regular subscribers rarely attempt to post infringing content without being asked, every day people wander in and post questions demanding links for movie X or TV show Y. Other users rarely respond and the mods act quickly, but it’s not a great look for /r/piracy, especially when the mods work so hard to keep things legal.

In short and as things stand, /r/piracy seems a solid discussion forum that operates well within Reddit’s rules and is unlikely to be shut down. However, a little common sense in respect of Rule 3 wouldn’t go amiss and perhaps the threat of a temporary ban here and there would help to focus the minds of the minority of users who play fast and loose with the sub’s future.

from TorrentFreak https://ift.tt/2wpgpUP
via IFTTT
Posted by papampi at 1:51 AM