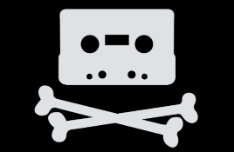 If entertainment content can be viewed, heard, held or otherwise experienced by humans, it can be copied and shared too. This has been the position for decades and the situation won’t be changing anytime soon.

These largely unauthorized acts of reproduction and distribution stoke the furnaces of what appear to be endless copyright wars. When DRM and similar measures can’t prevent sharing, new legislation, increased liabilities, and more severe punishments are pursued by copyright holders. None of it seems to work.

With the majority of corporate-controlled entertainment media persistently supported by a chorus of anti-piracy rhetoric, it’s unsurprising that equally passionate pro-sharing views proliferate on the ‘other’ side. However, there is an increasing middle ground occupied by pirates who are also content buyers. Indeed, pirates are now regularly cited as some of the entertainment industry’s best customers (1,2).

That’s why it’s always difficult to see people trying to make an honest living from selling content yet getting frustrated and sidetracked by inevitable online piracy that could potentially be turned around into something more positive.

This week, a small storm blew up on Twitter following a tweet by ‘Grim Darkthrone’, the owner of Cult Of Osiris, a fledgling digital black metal label. He’d just discovered that his label’s very first album release from Scandinavian band Uten Håp had been uploaded online.

“So, the human scum at Metal Tracker have illegally put up a torrent of Uten Håp to download,” he wrote on Twitter.

“I’ve sent them an email asking it be removed and they pay us the amount of revenue those downloads would’ve generated. If they don’t reply, my solicitor will speak to them. Poor show.”

While some might find themselves immediately offended by a) the piracy or b) the aggressive response, the chorus on Twitter erred towards ‘educating’ Grim on the potential benefits of sharing.

“[P]iracy may support your revenue in the long run. And a download doesn’t equal lost sales,” one metal fan wrote in response.

“How about they insert links to the official pages and support you this way? Be nice. You can’t win this fighting,” he added, linking to a TF article that suggested that piracy could actually boost digital sales.

It didn’t cut much ice with Grim, who – as mentioned earlier – is just starting out with his label.

“I like you man, but how about I decide what to do when someone is stealing music I release?” he responded.

“These people are thieves. You can explain it away how you want. It is stealing.”

As the tweets were rolling back and forth, we checked the number of downloads on Metal Tracker. As the image below shows, they sat at just over 100. 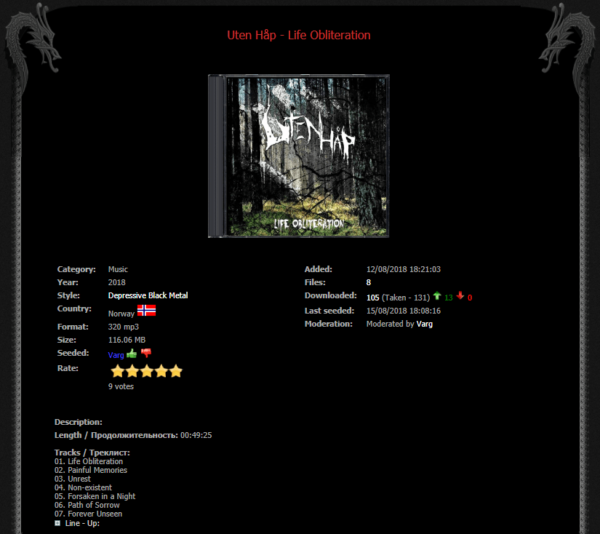 While this number of downloads is a drop in the ocean compared to mainstream releases, it’s important to realize that this is not mainstream content. And, as mentioned already, this appears to be Grim’s first release for his new label. It’s likely that a lot hinges on this album being a success so his tone is probably best viewed through that prism.

Indeed, in an email exchange with TF, Grim told us that his label is small. He needs data of who is streaming and downloading the band’s album and he needs valuable sales. His stuff being distributed on a tracker robs him of all of that, he told us.

We got the impression that the guy is simply trying to make a success of his work and that he finds this situation frustrating. Anyone with the ability to see both sides of an argument should appreciate why the guy feels the way he does, even if they don’t agree with him. He has a right – backed up by law – to be angry but could another approach prove more productive?

“[I]f you are clever, you use [piracy] to support your bands. If you’re trying to fight it, you’ll lose,” Grim was advised on Twitter.

The big question, of course, is how that can be achieved. From our brief exchange, we could tell that Grim probably won’t change his stance that piracy is tantamount to theft. However, he also said that Metal Tracker might have done things differently, in a way that could’ve benefited his label.

We aren’t going to second guess what might transpire but we’ll go out on a limb and say that legal action isn’t going to achieve the desired result. Why? Because it never does.

Legal action is expensive for major labels so for a small outfit it would simply prove to be a corrosive distraction. And, at just £5 for the official Uten Håp release (which seems great value), the label would have to sell dozens of albums to pay for a simple lawyer’s letter, let alone begin some kind of case.

As we told Grim, we’re no music industry experts but the whole thing is a probably a bit of a balancing act, with the existing popularity of the act he’s trying to promote (and their current sales) on one side, and what those sales might be with greater exposure via piracy on the other.

Hopefully, the guy will eventually find some peace and a way to benefit from the situation – he won’t be the first or last to try.

The album, for those who are interested, can be downloaded here.

from TorrentFreak https://ift.tt/2Bp18sY
via IFTTT
Posted by papampi at 1:04 AM