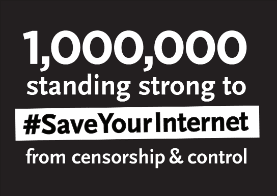 After years of careful planning and negotiating, the European Parliament was ready to vote on its new copyright directive last month.

With backing from large political factions and pretty much the entire entertainment industry, many assumed that proposal would pass.

The Copyright Directive was sent back to the drawing board following protests from legal scholars, Internet gurus, activists, and many members of the public. Article 13, often referred to as the “upload filter” proposal, was at the center of this pushback.

The vote was a massive blow to those who put their hope on the EU’s proposed copyright changes. Following the failure of SOPA and ACTA, this was another disappointment, which triggered several entertainment industry insiders to call foul play.

They claimed that the grassroots protests were driven by automated tools, which “spammed” Members of Parliament were with protest messages, noting that large tech companies such as Google were partly behind this.

This narrative is gaining attention from the mainstream media, and there are even calls for a criminal investigation into the matter.

Opponents of the upload filters clearly disagree. In part triggered by the criticism, but more importantly, to ensure that copyright reform proposals will change for the better, they plan to move the protests to the streets of Europe later this month.

Julia Reda, the Pirate Party’s Member of European Parliament, is calling people to join these protests, to have their voices heard, and to show the critics that there are real people behind the opposition.

“We haven’t won yet. After their initial shock at losing the vote in July, the proponents of upload filters and the ‘link tax’ have come up with a convenient narrative to downplay the massive public opposition they faced,” Reda writes.

“They’re claiming the protest was all fake, generated by bots and orchestrated by big internet companies. According to them, Europeans don’t actually care about their freedom of expression. We don’t actually care about EU lawmaking enough to make our voices heard. We will just stand idly by as our internet is restricted to serve corporate interests.”

Thus far, nearly a million people have voiced their discontent with the copyright reform plans through an online petition. And if it’s up to Reda, these people should do the same away from their keyboard.

On September 12th, Members of Parliament will vote on the future of the Copyright Directive and the protests are planned two weeks earlier, on August 26th.

“Our goal is clear: The Parliament must adopt alternatives for Article 11 and Article 13 that don’t force platforms to install upload filters and don’t threaten links and snippets with an extra layer of copyright,” Reda notes.

The public protests will take place in several cities including Berlin, Ljubljana, Prague, Stockholm, Vienna, and Warsaw. The organizers hope to gain the same momentum as the ACTA protests did when hundreds of thousands of people marched the streets.

That would certainly make an impact.

Meanwhile, the tension between opponents and proponents of the Copyright Directive keeps growing. The latter will hope that the protests will only draw a small crowd, but if the turnout is high, they can always point out that many of the protest cities have Google offices.

from TorrentFreak https://ift.tt/2Bb6sjq
via IFTTT
Posted by papampi at 9:41 AM