Snapchat Source Code Leaked Then Taken Down From Github 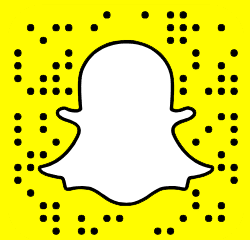 Many millions of DMCA notices are filed every week with the aim of reducing the amount of infringing content and links available online.

Most notices target the unauthorized sharing of movies, music, video games, and other entertainment media, but every now and again something more unusual is thrown into the mix.

That’s particularly true in respect of a DMCA notice that was recently filed with development platform Github. Sent by Snap Inc., it targets the unauthorized publication and distribution of Snapchat’s source code.

“I am [redacted] at Snap inc., owner of the leaked source code,” the notice sent last week reads.

“[I]t was leaked and a user has put it in this Github repo. [T]here is no url to point to [detailing the original content] because Snap Inc. doesn’t publish it publicly.”

In common with all ostensibly valid DMCA claims, Github responded by completely removing the Github repository in question. The site will not restore it unless a valid counter-claim is filed by its owner but at this stage, that seems unlikely to happen. 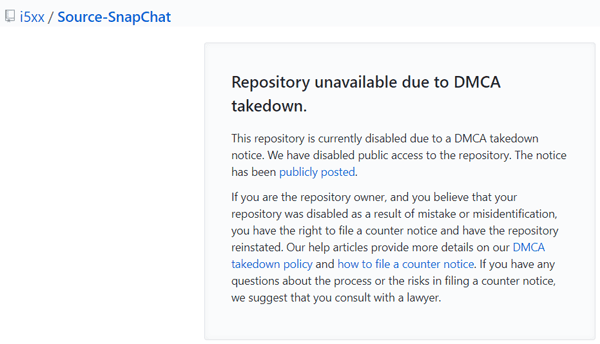 It’s unknown how the Github user obtained Snapchat’s source code or what aspect of the service the code relates to. No details are provided in the complaint so everything from Android and iOS apps to other company assets remain a possibility.

What seems relatively clear is that the user (listed on Github as ‘i5xx’) created the repository for the purpose of uploading the code. Nothing else has been uploaded to the account, before or since.

In his profile, user ‘i5xx’ claims to be from Tando Bago, which is a small village in Pakistan. The profile also links to a website which shares the same name as the user (https://i5xx.store). The site offers various phone programming services and what appears to be modified software, Snapchat included, while claiming a presence in Saudi Arabia.

Nothing else is known about the uploader and at least as far as Snapchat is making it known, the only information the company has on this source code leaker is his Github name and website URL.

This is not the first time that a prominent technology company has had its source code leaked on Github. Back in February, it was reported that Apple had filed a takedown notice with the site in response to the unauthorized uploading of source code for a core component of the iPhone’s operating system.

from TorrentFreak https://ift.tt/2OksQZD
via IFTTT
Posted by papampi at 11:36 PM