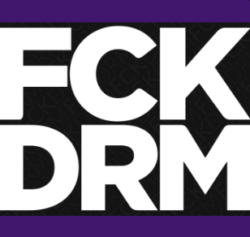 For several decades, video games developers and publishers have been doing everything in their power to prevent unlicensed copying and distribution of their products.

The theory is that if games are easy to copy, people will share them around with non-paying individuals and this will have a detrimental effect on sales for that product.

As a result, customers of companies like Denuvo sink significant sums into systems that attempt to protect their games from pirates. And Denuvo gets tough with anyone who dares to circumvent its systems.

Bucking this trend in the gaming marketplace are the folks behind GOG, the digital distribution platform for DRM-free video games and video. Brought to life by Poland’s CD Projekt, GOG has been offering content without DRM for more than eight years. It’s a strategy that has proven extremely popular with the gaming public and as a result, GOG has become synonymous with content ‘freedom’.

In a fresh move to enhance this reputation, GOG and owners CD Projekt have launched a new portal with the eye-catching title FCKDRM. The platform aims to promote GOG and other companies with a similar ethos, including those offering DRM-free music, books, and video.

“DRM-free approach in games has been at the heart of GOG.COM from day one. We strongly believe that if you buy a game, it should be yours, and you can play it the way it’s convenient for you, and not how others want you to use it,” GOG said in a statement.

“The landscape has changed since 2008, and today many people don’t realize what DRM even means. And still the DRM issue in games remains – you’re never sure when and why you can be blocked from accessing them. And it’s not only games that are affected, but your favorite books, music, movies and apps as well.”

Through the FCKDRM portal, GOG also hopes to educate people while igniting a discussion about DRM. The company wants to help consumers understand the implications of DRM, how it affects purchased content, and how the absence of DRM in a product leads to various benefits.

The benefits of DRM 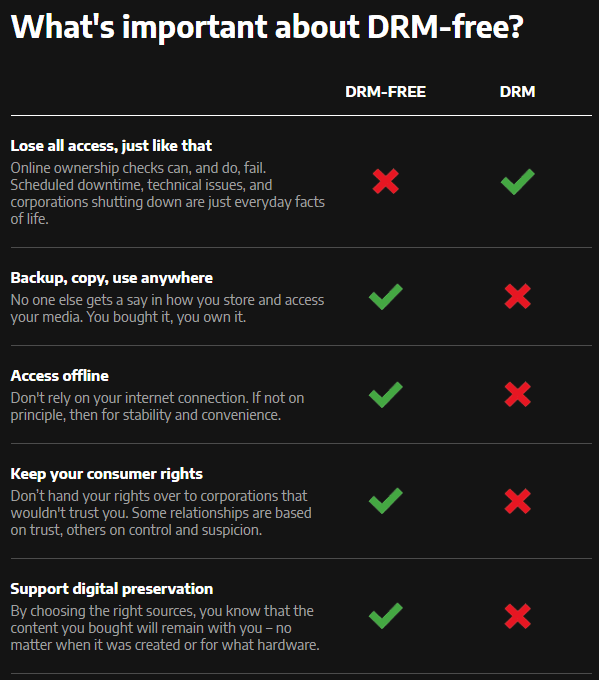 While the discussion over the negative effects of DRM has been sizzling for many years, the majority of consumers have become used to operating within its boundaries. Most games are protected by DRM but its security measures also extend to music, video, and books purchased from online vendors. Such content is controlled and could be taken away at any time.

“Games with DRM include a layer of software or code on top of what’s needed to just play the game. Nowadays DRM will send your information to an online server, it could run checks to see if you touched any files, or outright refuse access unless you’re logged in somewhere. In other words, DRM is there to question what you’re doing every step of the way,” GOG says.

While some DRM does have the ability to be somewhat unintrusive for some consumers, there’s a darker side, particularly with games. They can be turned off at any point and there isn’t a thing gamers can do about it.

“[T]here is a killswitch built into your games. Sure, DRM might not affect you right now, but corporations hold the key and they’ll only let you in as long as you can repeatedly prove ownership. As long as you’re connected to the internet. As long as their DRM works without fault. As long they’re still around,” GOG adds.

“So should the burden of proof be on you? Do you place your trust in someone who doesn’t trust you?”

The list of DRM-free resources listed on FCKDRM is currently fairly limited, with Bandcamp, 7Digital and emusic on the audio front, Project Gutenberg and OpenLibra on books, and Moving Image Archive and Vimeo on Demand on video. However, GOG is keen to expand the directory and is inviting companies to contact them in order to be included.

The FCKDRM initiative can be found here.

from TorrentFreak https://ift.tt/2whUTkS
via IFTTT
Posted by papampi at 1:17 AM