TIDAL Downloads Made By Possible by Teenage Coder 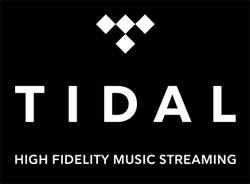 After years of music only being made available on CD or permanent digital download, streaming services are now all the rage.

Platforms such as Spotify, Pandora and Deezer are particularly well-known in the market today but relative new-comer TIDAL has also been making waves. The platform, launched by artists including Jay Z, Kanye West, Beyonce and Madonna, is perhaps best known for its exclusives.

TIDAL comes in two flavors – TIDAL Premium (lossy quality) and TIDAL HiFi, a lossless CD quality service for the audio connoisseur. In ordinary circumstances both of these services are streaming only, but thanks to a coding upstart from Germany, users of the service can now download music from TIDAL to keep.

A recent high school leaver, Lordmau5 previously created a tool for downloading music from Spotify. He’s been coding for six years already, starting out with Visual Basic and moving onto Java and lots of Minecraft modding.

Lordmau5 informs TorrentFreak that Spotify later improved its security so after being prompted by others he decided to see if downloads from TIDAL were a possibility.

“I recently looked into some potential APIs and found out that it’s super simple to get the stream-/offline-URL for the tracks [from TIDAL] and… well… that’s when the coding began,” he says.

The end result is TiDown, a tool that allows users to quickly download music from TIDAL in lossy or lossless formats. It’s a command line tool but comes with all necessary instructions.

Lordmau5 says that a few other streaming downloaders are available but these tend to require the user to listen to every track all the way through, a somewhat laborious task. TiDown is different, he says.

“This is an actual downloader – you are logging into TIDAL through the tool and you get the direct ‘stream-URLs’ that can then be downloaded,” Lordmau5 explains.

Over the past few days in advance of TiDown’s release, Lordmau5 has been having a bit of a laugh at the expense of people who didn’t believe he had created a proper working downloader.

To support his trolling he created the most ancient-looking website possible alongside a deliberately trashy ‘promo’ video. 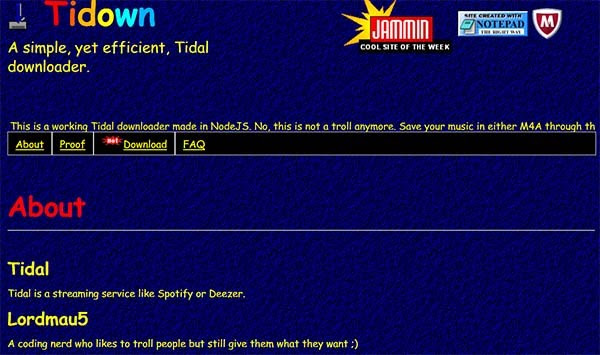 Of course, tools like TiDown tend not to last very long once they’re discovered. So will TIDAL stop TiDown?

“I assume so,” Lordmau5 says. “I really hope the tool will work for around a month – since that’s the free trial for TIDAL.”

from TorrentFreak http://ift.tt/2bOxXkT
via IFTTT
Posted by papampi at 3:05 AM