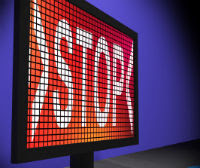 Starting a few days ago, many Indian Internet users noticed that their favorite torrent websites were blocked and displaying a rather scary message.

The blocks themselves are nothing new. For years Indian copyright holders have sought to protect their content from unauthorized online distribution.

This has mainly taken the form of so-called ‘John Doe’ orders where access to sites such as The Pirate Bay or ExtraTorrent is restricted to protect copyrighted content from being freely shared.

However, the warning message that’s currently presented when attempting to access blocked sites has a lot of people worried.

The notice reads that the site in question has been blocked per instruction of the Government or through a court order, similar to what it said before. In addition, it adds that those who still access the content in question may face up to three years in prison and a hefty fine.

“Viewing, downloading, exhibiting or duplicating an illicit copy of the contents under this URL is punishable as an offence under the laws of India, including but not limited to under Sections 63, 63-A, 65 and 65-A of the Copyright Act, 1957 which prescribe imprisonment for 3 years and also fine of up to Rs. 3,00,000/-.”

A relatively small change, but one with widespread impact it seems.

Several Indian news outlets have started to warn their readership that the threat is real. India Today, for example, reports that merely downloading a torrent file or viewing a copyrighted image from a file-hosting site may land people in prison.

“You don’t have to download a torrent file, and then the actual videos or other files, which might have copyright. Just accessing information under a blocked URL will land you in jail and leave your bank account poorer by Rs 3 lakh,” the news site reports.

While the warning message can be interpreted in various ways, very little appears to have changed. There’s no new law that introduces higher sentences. In fact, the message clearly quotes India’s 1957 Copyright Act.

In addition, there are no signs that the authorities are planning to crack down on individual file-sharers. Let alone people who merely download a torrent file, not the infringing content itself.

There is a recent court case that may have spurred the recent change though.

Earlier this year the Government’s Department of Electronics and Information Technology actually intervened in one of the “John Doe” cases on behalf of the public, arguing against site-wide blocks.

In this case, the High Court decided against the Government, arguing that broad blockades are warranted. Among other things, the Court found that it is the “duty of the government” to “assist in the enforcement of court orders.”

In this light it could be that the Government “assisted” in updating the language of the blocking message.

From the information we’ve seen thus far, the wording of the blocking notification is the only thing that has changed so far. But, considering the response from the media and public, this is already quite effective as a deterrent.

from TorrentFreak http://ift.tt/2bp306h
via IFTTT
Posted by papampi at 1:45 AM