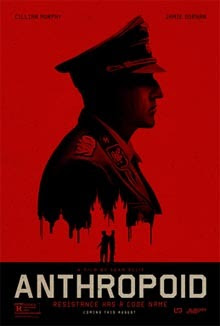 Anthropoid is a new historical thriller which tells the story of the assassination of Reinhard Heydrich, a high-ranking German Nazi official during World War II, and one of the main architects of the Holocaust.

The movie has been getting mixed reviews so for those worried that their investment may leave them underwhelmed, a pirate copy is often the solution.

In the early days following a release, file-sharers often have to put up with so-called ‘cam’ or camcorder copies. Nearly always of low quality, these are often avoided by those who don’t mind waiting for a better release. Nevertheless, studios feel that any copy is a threat and they often hire anti-piracy companies to purge them from the web.

That’s exactly what New York City-based film distribution company Bleecker Street did to protect the release of Anthropoid with their hiring of India-based anti-piracy outfit MarkScan. On August 12, on the day of the movie’s release in the US, MarkScan began sending takedowns to Google.

However, there was a ‘small’ problem. Anthropoid hadn’t even been leaked online yet.

In a notice to Google targeting 66 unique domains, MarkScan demanded the removal of dozens of allegedly infringing links. Of course, not a single one related to a leak of the full movie. As can be seen in the sample below, many links reference sites that appear to have the movie but in fact only carry the official trailer.

But while taking down the official trailer is enough to ensure that fewer people are aware of the movie’s existence, MarkScan weren’t finished yet, not by a long way.

The very first link in the notice targets a completely unrelated and entirely legal short film which just happens to use the word ‘Anthropoid’ in its description.

The third link – and this is a good one – attempts to stop anyone on Twitter finding the movie using the hashtag ‘Anthropoid’ by asking Google to remove ‘https://twitter.com/hashtag/anthropoid’ from its search indexes.

What follows is a car crash of sizeable proportions, with MarkScan attempting to take down promotional material and video clips from the Wall Street Journal, People.com, The Hollywood Reporter, and many other sites discussing the title.

As if that wasn’t enough, MarkScan then places the BBC in its sights, demanding that Google removes its world radio and TV homepage from the company’s search results, for no apparent reason.

Fortunately, Google spotted this disastrous notice before it did any real harm and refused to remove any links. That means that the many reviews the company tried to wipe out will stand, as will the BBC’s radio and TV page.

However, it boggles the mind to think that an anti-piracy outfit would send such a notice (and presumably charge the distributor for it) before taking the time to check that the movie had actually been leaked online. But by now, that’s not really a surprise, especially given MarkScan’s earlier efforts.

from TorrentFreak http://ift.tt/2bEhLQJ
via IFTTT
Posted by papampi at 2:16 AM