Running a Torrent Tracker For Fun Can Be a Headache 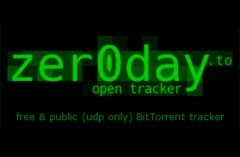 While torrents will work without them, trackers are very handy for quickly finding other BitTorrent peers with the same content. They’re also essential for those who have DHT and PEX disabled in their clients.

Often run by people with an interest in the technology, public trackers are incapable of generating funds in their own right. This means that from a financial perspective there’s almost no incentive to run one.

The important thing to remember about trackers is that they carry no infringing content whatsoever, they merely direct torrent client traffic to a particular torrent hash. Nevertheless, this doesn’t stop tracker operators from getting copyright-related headaches.

In early 2016, a new stand-alone tracker was born. Operating from zer0day.ch, the tracker grew quite quickly in the first few days of life after ETRG (ExtraTorrent’s release group) added the tracker to its releases.

But with its first 10,000 torrents tracked, the problems began. The tracker was hosted in Germany and soon its host ran out of patience with mounting copyright infringement claims. After moving to Romania, history repeated itself when the tracker’s host suspended its server.

“They didn’t want to hear that running a tracker is not illegal,” zer0day’s admin informs TF.

Late April, the tracker moved again, this time to a Latvia/Sweden setup. From there the tracker’s popularity went through the roof after an important development. Unknown to the tracker’s admin, The Pirate Bay began adding zer0day as one of the default trackers in its magnet links.

Now coordinating millions of peers, zer0day became an important player but in August the site had yet more trouble. The tracker’s server went offline again, this time without any prior notice and despite the fact that in eight months of operation not a single DMCA notice had ever been directly filed with the tracker.

With a fourth server secured elsewhere, zer0day continued with its business but more aggravation was on the horizon. Early this month, Swiss domain registry Switch told the site’s operator that his .CH domain was in trouble.

According to Switch, someone had tried to send some documents to the domain owner by snail mail and the documents had not reached the address mentioned in the WHOIS. Zer0day’s admin was given 30 days to prove his identity (with residency papers, for example) or face his domain being deleted.

While keeping the .CH domain would have been preferable, Switch didn’t make anything easy. They blocked the domain from being transferred to a third party and refused to say which agency had tried to contact the tracker’s operator.

Frustrated, the tracker’s admin decided to jump ship after a friend donated a server and a new .to (Tonga) based domain. At the time of writing the tracker is doing well, reporting 1.21m torrents and 4.44m peers (3.04 M seeders + 1.40 M leechers) on its main page.

Speaking with TF, the tracker owner says that while the ride has been a bumpy one, things got much worse after Pirate Bay began adding his tracker URL by default, something he had no control over.

“Things went from bad to worse after TPB added the tracker to their magnet links. [That knowledge] might help ease someone’s efforts to run a torrent tracker in the future,” he concludes.

As mentioned earlier, trackers aren’t absolutely essential for the functioning of BitTorrent transfers. However, their existence certainly improves matters and sites like zer0day are happy to contribute, even if their work mainly flies under the radar.

from TorrentFreak http://ift.tt/2brVlH7
via IFTTT
Posted by papampi at 12:30 PM