The International Olympic Committee (IOC) is known to maintain a tight grip on its intellectual property rights.

Using an image of the Olympic rings or even just the world ‘Olympic’ can lead to legal trouble, especially in a commercial context.

Most valuable, however, are the broadcast rights. With literally billions of dollars at stake, the IOC is going all out to prevent people from streaming its events without permission.

In previous years we’ve seen a crackdown on torrents, with the IOC targeting The Pirate Bay. Nowadays, however, live streaming appears to be a bigger target, including homemade rebroadcasts using Twitter’s Periscope.

Over the past week the IOC has sent hundreds of takedown notices to Periscope, targeting live streams of the 2016 Rio Olympics.

While most Periscope streams are of a horrible quality, with only a few dozen viewers, they’re seen as a legitimate threat. As a result, the IOC has hired a dedicated team of investigators to track down and report these and other unauthorized streams.

At the time of writing, Periscope has received around 1,000 takedown requests from the IOC for infringing footage from Rio, and this number continues to rise. 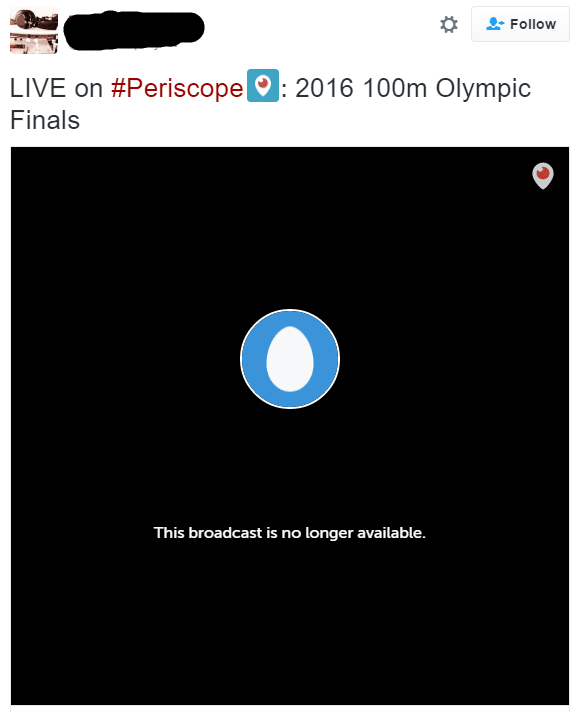 Periscope is the only live streaming service that publicly shares its takedown notices with the Lumen database but it’s safe to say that the IOC also targets other sites and services. These include dedicated sports streaming sites offering high-quality streams.

Besides the rebroadcasting of the official TV-signal, the IOC also explicitly forbids the use of Periscope and similar apps to broadcast footage at official Olympic venues. This means that visitors and accredited persons are not allowed to live-stream inside any of the stadiums.

Rules or no rules, it appears that thousands of Periscope users are happily streaming live events. And even if they all stopped, the anti-piracy efforts seem rather futile.

Besides homebrew live-streams there are numerous dedicated streaming sites that continue to offer high-quality footage of the Olympics.

from TorrentFreak http://ift.tt/2aZ5MPn
via IFTTT
Posted by papampi at 11:38 AM