After becoming the world’s largest torrent site months before, July 20 saw KickassTorrents’ reign collapse when the organization was dismantled by US law enforcement.

In addition to the site going offline, KAT’s alleged founder, Artem Vaulin, was arrested in Poland, from where the United States Government is now demanding his extradition.

If its website was to be believed, Cryptoneat was a sizeable web company with perhaps dozens of employees. It first appeared online in 2014 and months later was updated with a very basic logo.

For non-Russian speakers the message underneath the graphic reads “With no zombies”.

Over the months that followed the site had periodic updates and by August 2015 was sporting a new logo and some early indications of what its business might be.

“We develop our own products. From concept to the user’s screen,” a statement read.

“Cryptoneat is a software development company crafting our own products since 2008. Our latest project is Wine scanner iOS application Wineeapp.com,” the site read in January 2016.

“We support personal responsibility and involvement with no over-management standing in the way of imagination and creative thinking. Flexible schedules and smart workspace. We hold to the ergonomics cult: Herman Miller chairs, standing desks, Apple hardware and multi-monitor configurations.”

Cryptoneat’s logo was developed by former architect and Ukrainian graphic artist Andrey Koval. There’s no suggestion that Koval was directly involved in Cryptoneat or KAT, but he does share the same location, Kharkiv, the second-largest city in Ukraine.

Koval did not immediately respond to TorrentFreak’s requests for comment but we did manage to find a video which showcases the Cryptoneat logo he created for the company.

Cryptogram from CRYPTONEAT on Vimeo.

Cryptoneat operated from two URLs, .COM and .UA. In the early days following Vaulin’s arrest the sites were operational, but both have now disappeared. Perhaps not surprising given the statements made by the US Department of Justice.

“During a significant part of the conspiracy, Vaulin has operated KAT under the auspices of a Ukrainian-based front company called Cryptoneat,” wrote Jared Der-Yeghiayan, a Special Agent with Homeland Security Investigations.

“As of on or about June 20, 2016, Vaulin’s LinkedIn profile identifies him as the founder of Cryptoneat and lists the company’s creation date as November 2009. On Cryptoneat’s Instagram and Facebook page I have viewed pictures of Vaulin purportedly at Cryptoneat’s office.”

Cryptoneat’s Facebook and Instagram accounts have since been disabled. Various LinkedIn profiles relating to Vaulin and other employees have been edited. Having previously indicated the Cryptoneat’s employees could potentially number as many as 50, the company’s main LinkedIn page now list the company’s size as “myself only.”

Slowly but surely the company is disappearing from the web, with just a couple of pages now available via Google’s cache. One offers coding jobs with a competitive salary, paid vacation and holidays, health insurance, a stocked kitchen and gym fees.

But now, a month following KAT’s shutdown, Cryptoneat’s online presence has taken another hit. Two days ago the site’s .COM domain ceased to function after its two-year registration period expired. 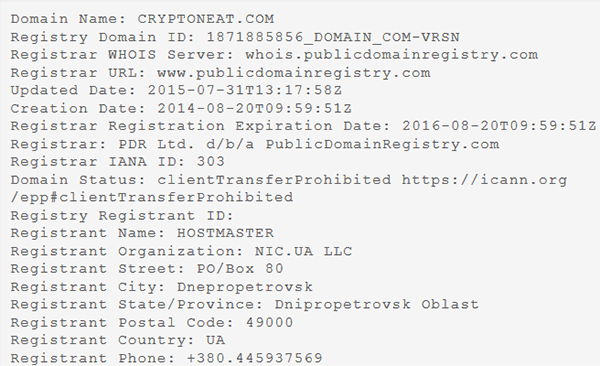 Unlike several other KickassTorrents-related domains, the US Government doesn’t appear interested in seizing Cryptoneat’s domains at this stage, even though it clearly states that the Ukraine-based company was used as a KAT front. Indeed, the Homeland Security investigation found that at least several Cryptoneat employees worked on KickassTorrents.

“Many of the employees found on LinkedIn who present themselves as working for Cryptoneat are the same employees who received assignments from Vaulin in the KAT alert emails,” Special Agent Jared Der-Yeghiayan reported.

Perhaps unsurprisingly, the three main individuals mentioned by Der-Yeghiayan (although not by name in the criminal complaint) have removed Cryptoneat from their resumes. Lower ranking employees have left their history in place but moved on to new jobs.

Given the apparent size of the Cryptoneat operation, it’s not yet clear why the US Government has only reported one arrest thus far. It’s certainly likely that it has more cards up its sleeve but it could be a considerable length of time before those are revealed in public.

from TorrentFreak http://ift.tt/2bJynGP
via IFTTT
Posted by papampi at 3:50 PM