Denuvo Weakens After ‘Inside’ Cracked in Record Time

Dozens of anti-piracy techniques have been tested over the years on formats ranging from cassette tapes to digital downloads, but for pirates the lure of free content is both intoxicating and enduring.

In recent years, games developers have come to accept that piracy cannot be eradicated entirely, but it can be slowed down. The main aim in the modern era is to stop games leaking in the days, weeks and early months following their launch. This allows titles, especially those with high production costs, to make the best of those crucial early days.

In no insignificant terms that breathing room has been provided by Austrian anti-piracy outfit Denuvo. Its anti-tamper technology is quite possibly the best there is and as a result, many so-called AAA titles have remained piracy free since their launch. Just recently, however, significant cracks (excuse the pun) have appeared in its armor.

Early this month, a ‘Scene’ group called CONSPIR4CY properly cracked an iteration of Denuvo that had been protecting Rise of the Tomb Raider (ROTTR). The news had many pirates extremely excited.

While undoubtedly a momentous occasion, ROTTR had been released in January, meaning that in theory CONSPIR4CY might have worked on the crack for six or seven months, a lifetime for most pirates. Furthermore, half a year’s head start is huge for the title’s developers in terms of sales, so without doubt Denuvo had done its job.

Yesterday, however, there was a new development which might represent a more worrying chink in Denuvo’s defenses.

With a lack of fanfare usually associated with some of the Scene’s more mature groups, CONSPIR4CY (a reported collaboration between the CPY and CODEX groups) released a fully cracked version of puzzle-platformer ‘Inside‘ 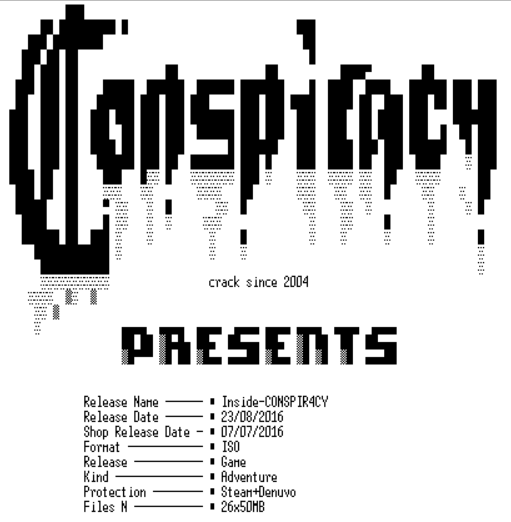 The importance here is that while ROTTR enjoyed six months without having to compete with free, Inside was released for Windows on July 7, 2016. No one but CONSPIR4CY knows precisely when they began chipping away at the game’s protection but even if they started on day one, it has taken only six weeks to defeat it.

There is some speculation that Inside took less time to crack because in storage terms it’s a smaller sized game that ROTTR. That being said, it will be of little consolation to Danish developer Playdead who will have paid Denuvo handsomely for their protection.

With CONSPIR4CY all but impossible to find, let alone obtain a comment from, TorrentFreak asked game cracker Royalgamer06, a colleague of Voksi who found a Denuvo workaround earlier this month, for his thoughts on the new release.

“Inside’s Denuvo protection is quite recent and therefore we could expect all sorts of Denuvo (Steam) games coming from [CONSPIR4CY].”

Royalgamer06 believes that it may have only taken CONSPIR4CY two weeks to crack Inside and that another big game’s debut (also Denuvo protected) might have influenced the pirate release yesterday.

“It took [CONSPIR4CY] two weeks. They either waited to release it (just before the new Deus Ex game is nice timing) or it’s all the time it took them to patch all in-game triggers and polish the crack,” he explains.

So all eyes now turn to the brand new release of Deus Ex Mankind Divided. If that game is quickly cracked by CONSPIR4CY, Denuvo could be coming out in a cold sweat. In the meantime, others are also attempting to dismantle their empire.

from TorrentFreak http://ift.tt/2bDFv8O
via IFTTT
Posted by papampi at 12:31 AM