Indian ISPs Speed Up BitTorrent by ‘Peering’ With a Torrent Site

From a networking perspective most Internet providers are generally not very happy with BitTorrent users.

These users place a heavy load on the network and can reduce the performance experienced by other subscribers. In addition, the huge amount of data transferred outside the ISPs’ own networks is also very costly.

Some ISPs are trying to alleviate the problem by throttling or otherwise meddling with BitTorrent traffic, but there is a more customer-friendly solution.

Instead of working against their torrenting subscribers, various Internet providers in India have found a win-win solution. They help users to download content faster by linking them to local peers in their own network.

ISPs such as Alliance Broadband, Excitel, Syscon Infoway and True Broadband, have been offering accelerated torrents for a while. Some have had their own custom ‘caching’ setups but increasingly they are teaming up with the torrent search engine Torbox.

While not well-known in the rest of the world, Torbox is a blessing for many Indians who are lucky enough to have an ISP that works with the site.

Through Torbox they can download torrents at speeds much higher than their regular Internet connection allows. This is possible because Torbox links them to peers in the local network, which means that the traffic is free for the ISP.

Most people who visit Torbox will see a notice that their ISP doesn’t have a peering agreement. However, for those who have a supporting ISP the torrent site returns search results ordering torrents based on the proximity of downloaders.

Torbox uses downloaders’ IP-addresses to determine who their ISP is and directs them to torrents with peers on the same network.

“It’s a highly sophisticated IP technology based on network proximity,” Torbox explains, adding that every ISP is welcome to sign a peering agreement.

“Then based on your IP address TorBox can estimate how well you are connected to peers who have the content in question. It’s quite a tough job but luckily it works,” they add.

The downloads themselves go through a regular torrent client and don’t use any special trackers. However, the torrent swarms often connect to dedicated “cache peers” as well, which serve bits and pieces to speed up the swarm.

Torbox itself doesn’t get involved in the traffic side, they only point people to the “peering” torrents. The actual peering is handled by other services, such as Extreme Peering, which is operated by Extreme Broadband Services (EBS).

TorrentFreak spoke with EBS director Victor Francess, who says that with this setup most torrent data is served from within the ISP’s own network.

“It all creates a very powerful user experience, so in fact just about 10-20% of all torrent traffic comes from the upstream and everything else is local,” Francess says.

As for the content, Torbox links to the torrents you would generally find on a torrent site. It even has a handy catalog page featuring some recent blockbusters and other popular videos. This page also advertises Strem.io as a service that can be used to stream video torrents directly. 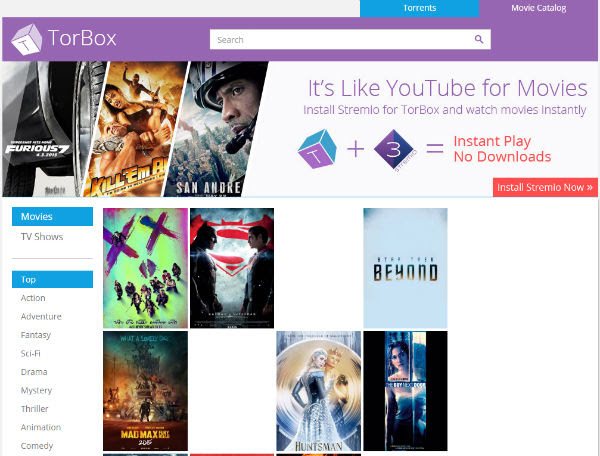 TorrentFreak spoke to several Indian Torbox users at different ISPs, who are all pretty happy with the service. It allows them to download torrents at much faster rates than their regular Internet speed.

One user told us that his downloads sometimes reach a 10 MBps download speed, while his Internet connection is capped at 4 MBps.

The ISPs themselves are not too secretive about their peering agreements either. Excited previously advertised the Torbox peering on its main site and others such as Sifi Broadband still do.

Alliance Broadband still lists Torbox in its FAQ at the time of writing, describing it as a “local content search engine” through which subscribers receive files “at ultra-high speed from the other peering users.”

For most outsiders it’s intriguing to see ISPs publicly cooperating with a torrent site, but in India it’s reality.

The question is, however, how long this will last. In recent months piracy has become a hot topic in India, with Bollywood insiders linking it to massive losses and even terrorism.

Ironically, many ISPs have also been ordered by courts to block access to hundreds of piracy sites, including many torrent search engines. For now, however, Torbox remains freely accessible.

from TorrentFreak http://ift.tt/2brtPUh
via IFTTT
Posted by papampi at 1:30 AM