In recent years, most large pirate sites have faced domain name issues of some kind.

Just last week the streaming site Putlocker lost its domain name in a lawsuit, and a few days ago ExtraTorrent had its domain suspended following what appears to be a copyright complaint.

Another site that was hit recently is the streaming portal Pubfilm. Last week the site had several of its domain names suspended by its registry, including the main pubfilm.com domain.

In response, the site swiftly moved to a new domain name, announcing the change on social media.

“Pubfilm have changed to a new domain its pubfilm.ac or pubfilm.is. Sorry about that. Thanks for your patience,” the site’s operator announced in a Facebook post last week.

However, since not all former users are on Facebook, the site didn’t stop there. To prevent people from ending up at copycat sites through Google searches, Pubfilm launched an Adsense campaign too.

When we search for “Pubfilm” on Google, a prominent advertisement is displayed at the top or below the results. The ad links people to Pubfilm.ac, the new “official home” of the streaming site. 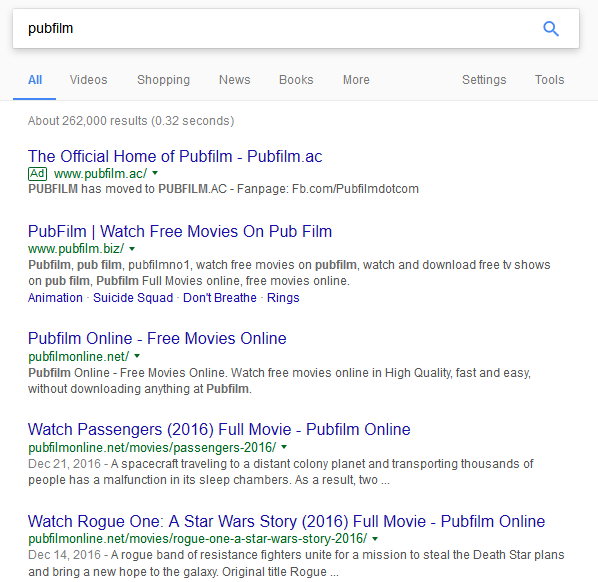 While these ads are not cheap, it shows that Pubfilm is dedicated to getting its users back on board. One of the upsides is that it pre-selects only users without an ad-blocker, who are likely to bump the site’s revenue in the long term.

Whether these ads will last long is doubtful though. The search engine is very strict when it comes to advertisements, not least due to pressure from rightsholders.

While this ad appears to have slipped through the cracks, rightsholders will not shy away from holding it against Google.

Pubfilm, meanwhile, will probably be happy with the extra attention it receives.

from TorrentFreak http://ift.tt/2lNzGbY
via IFTTT
Posted by papampi at 4:26 AM