Canada Rejects Flawed and One-Sided “Piracy” Claims From US Govt.

Every year the Office of the US Trade Representative (USTR) releases an updated version of its Special 301 Report, calling out other nations for failing to live up to U.S. IP enforcement standards.

In recent years Canada has been placed on this “watch list” many times, for a variety of reasons. The country fails to properly deter piracy, is one of the prime complaints circulated by the U.S. Government.

Even after Canada revamped its copyright law, including a mandatory piracy notice scheme and extending the copyright term to 70 years after publication, the allegations didn’t go away in 2016.

Now, a year later new hearings are underway to discuss the 2017 version of the report. Fearing repercussions, several countries have joined stakeholders to defend their positions. However, Canada was notably absent.

While the Canadian Government hasn’t made a lot of fuss in the media, a confidential memo, obtained by University of Ottawa professor Michael Geist, shows that they have little faith in the USTR report.

“Canada does not recognize the validity of the Special 301 and considers the process and the Report to be flawed,” the Government memo reads.

“The Report fails to employ a clear methodology and the findings tend to rely on industry allegations rather than empirical evidence and objective analysis.”

The document in question was prepared for Minister Mélanie Joly last year after the 2016 report was published. It points out, in no uncertain terms, that Canada doesn’t recognize the validity of the 301 process and includes several talking points for the media.

Excerpt from the note 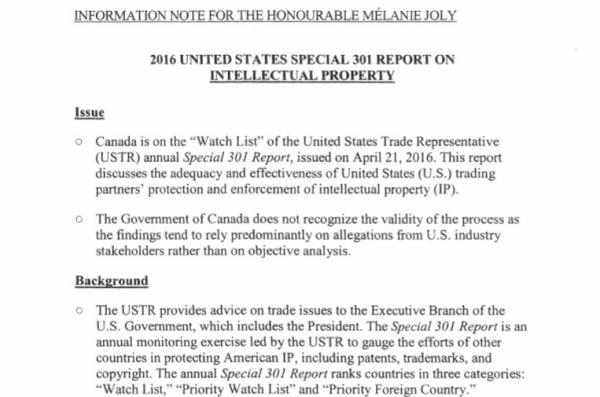 This year, rightsholders have once again labeled Canada a “piracy haven” so it wouldn’t be a big surprise if it’s listed again. Based on the Canadian Government’s lack of response, it is likely that the Northern neighbor still has little faith in the report.

TorrentFreak spoke with law professor Micheal Geist, who has been very critical of the USTR’s 301-process in the past. He believes that Canada is doing the right thing and characterizes the yearly 301 report as biased.

“I think the Canadian government is exactly right in its assessment of the Special 301 report process. It is little more than a lobbying document and the content largely reflects biased submissions from lobby groups,” Geist tells TorrentFreak.

In a recent article the professor explains that, contrary to claims from entertainment industry groups, Canada now has some of the toughest anti-piracy laws in the world. But, these rightsholder groups want more.

Some of the requests, such as those put forward by the industry group IIPA, even go beyond what the United States itself is doing, or far beyond internationally agreed standards.

“[T]he submissions frequently engage in a double standard with the IIPA lobbying against fair use in other countries even though the U.S. has had fair use for decades,” Geist says.

“It also often calls on countries to implement rules that go far beyond their international obligations such as the demands that countries adopt a DMCA-style approach for the WIPO Internet treaties even though those treaties are far more flexible in their requirements.”

This critique of the USTR’s annual report is not new as its alleged biased nature has been discussed by various experts in the past. However, as a country, Canada’s rejection will have an impact, and Professor Geist hopes that other nations will follow suit.

from TorrentFreak http://ift.tt/2mKfOKh
via IFTTT
Posted by papampi at 12:51 PM