Denmark was among the first countries where The Pirate Bay was blocked, now more than ten years ago.

A lot has changed since then. At the moment, major Danish ISPs are preventing subscribers from accessing roughly 300 pirate sites, and this list is far from complete.

Aside from expanding the list of sites, the parties involved also realized that blocking is not the end goal. Ideally, pirates should be directed toward legal services. This way they can still enjoy the content, with more money flowing to the makers.

To facilitate this process several stakeholders, including the Danish Ministry of Culture, anti-piracy group RettighedsAlliancen, the Telecom Industry Association, and the Confederation of Danish Industry, are introducing a new landing page for blocked users today.

The new landing page coincides with the relaunch of the “Share With Care” campaign, which now includes the custom film and TV search engine FilmFinder. This offers blocked users the option to easily find legal alternatives, if these are available.

RettighedsAlliancen CEO Maria Fredenslund informs TorrentFreak that it’s a top priority to protect the rights of creators, but that this effort doesn’t stop at simply blocking pirates.

“Through the promotion of legal services, the goal of Share With Care is not only to stop traffic to illegal pages but also to move them to legal services. Today, there are plenty of legal services and products that offer the experiences users are searching for,” she says. 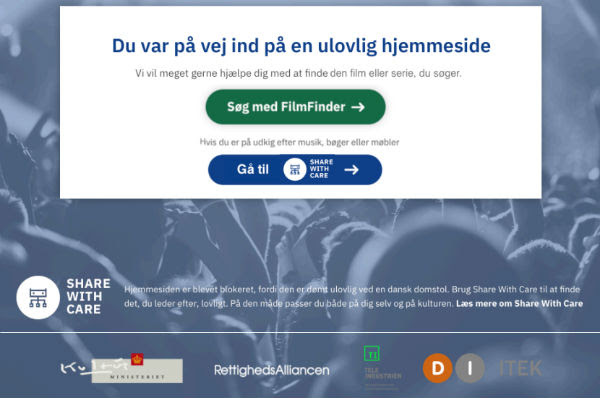 According to estimates from SimilarWeb, there were nearly 600 million Danish visits to pirate sites in 2017. This shows that the pirate audience is still massive. With the “Share With Care” campaign the parties hope to curb this trend.

Jakob Willer, Director of the Telecom Industry Association, notes that Internet providers prefer this educational approach over the legal threat campaigns that swept the country earlier this year.

“We do not believe that wagging index fingers or threats of lawsuits work. The role of telecommunications companies, therefore, is to guide our users toward legal content, while we vigilantly safeguard that blocking takes place on a clear juridical foundation.

“With the Share With Care campaign, we have found good, balanced path based on cooperation among the most important stakeholders in the field,” Willer adds.

While the new landing page and the FilmFinder site are certainly educational, the question is whether they will prove sufficient.

There is no denying that there are a lot of legal options out there, but with the increased fragmentation of online video, people may need to sign up with more than a handful of services to access everything.

Many pirates are avid legal consumers already, but legal options have their limits when it comes to affordability and convenience, especially when compared to pirate alternatives.

We have highlighted this several times in the past and just recently it was suggested as a potential explanation for why BitTorrent traffic is making a comeback.

from TorrentFreak https://ift.tt/2pIAfYj
via IFTTT
Posted by papampi at 9:03 AM