Explicit Music Piracy Warnings are Seen As Most Effective 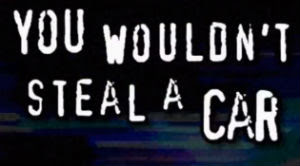 Over the past decades, the entertainment industries have tried out numerous anti-piracy campaigns.

From “don’t copy that floppy,” “copyright alerts,” to “get it right,” and everything in between, it has been tried.

The problem with these campaigns is that it’s hard to measure the direct effect. This prompted psychology researchers Joanne Ullman and Clayton Silver from the University of Nevada, Las Vegas, to conduct a controlled experiment.

The results, published in an article titled “Perceived Effectiveness of Potential Music Piracy Warnings” show that some warnings are more effective than others.

The researchers conducted a study where students would see a series of piracy warning labels. These came with one of four icons, depicted below, as well as one of the signal words; NOTICE, IMPORTANT, and STOP. For each of these, five different warning categories were created.

4 icons were tested with varying signal words and warnings

The students then had to rate each of these 60 warning messages for perceived effectiveness. These ratings were then analyzed to see if some are believed to work better than others, which was indeed the case.

The computer icon with a download arrow and a slash through it received the highest rating. The one of the right, with the cross and without the computer, was seen as least effective.

As for the signal words, both IMPORTANT and STOP were seen as more effective than NOTICE. This is something senders of infringement ‘notices’ might want to keep in mind.

When it comes to warnings, the combination of “this is illegal” with “you may be monitored and fined” received the highest perceived effectiveness rating. The control group where no warning was shown was the least effective.

These findings suggest that the more explicit warnings work better. 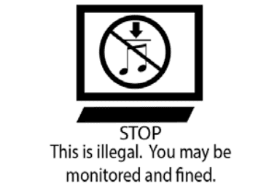 Indeed, that’s also the case when the researchers pinpointed the most effective combinations of all, with an example pictured on the right.

The most effective warning includes a computer for context, a download symbol, a slash symbol, the signal words STOP or IMPORTANT, and a message with all consequences (fined and monitored).

It is worth noting that these results are about ‘perceived’ effectiveness. While that’s a decent indicator, it doesn’t say anything about how these warnings would change the behavior of an actual audience of pirates.

This experiment is limited to a small set of warnings, but the researchers believe that developing an effective warning label can help to deter piracy and inform consumers.

The research suggests that explicit warnings are better than vague ones. In addition, we would caution that some campaigns can also go too far. Over the past decade, the “Piracy. It’s a crime” PSA has been mocked and ridiculed for being overly dramatic, without much substance.

Joanne Ullman, lead author of the article, tells us that the “Piracy. It’s a Crime” campaign isn’t particularly informative and therefore not very explicit. Providing explicit information about the risks appears to be most effective.

“This may be of value to some consumers given that we all have varying levels of risk aversion due to personality and/or situational factors,” Ullman says.

“For others, perhaps being reminded of these restrictions would embolden them to take legal and proactive measures to change current policies. The overall aim of this research is to maximize the capacity of people to make sound decisions for themselves.”

from TorrentFreak https://ift.tt/2yAacqk
via IFTTT
Posted by papampi at 11:36 AM