The Web Sheriff, aka John Giacobbi, has been protecting the Internet from pirates for well over a decade.

In the early days, he became somewhat of a cult figure thanks to his polite style and trademarked letterhead. This set him apart from other anti-piracy crusaders who usually sent DMCA takedown requests with a more aggressive lawyer-like style.

The Sheriff once had a lively discussion with The Pirate Bay folks, who then sent him this invoice fax. Not much later relationships deteriorated even further after Giacobbi announced he would sue the site’s operators in the US, France, and Sweden, but not much came of that.

In recent years the Web Sheriff hasn’t been parading in public much, but together with his deputies, he remains on duty. In recent years he has sent thousands and thousands of takedown requests to Google, for example.

We like to stay updated on the Sheriff’s accomplishments and when we looked at some recent submissions one targeted domain name stood out. Over the past weeks, Film.nl was targeted twice on behalf of the American film distributor NEON. The first time it listed a “Borg vs McEnroe” URL and later an “I, Tonya” link.

Granted, if you look at the pages in question, they might look suspicious with terms such as “I, Tonya torrent” and “I, Tonya downloaded,” surrounded by incomprehensible Dutch words. 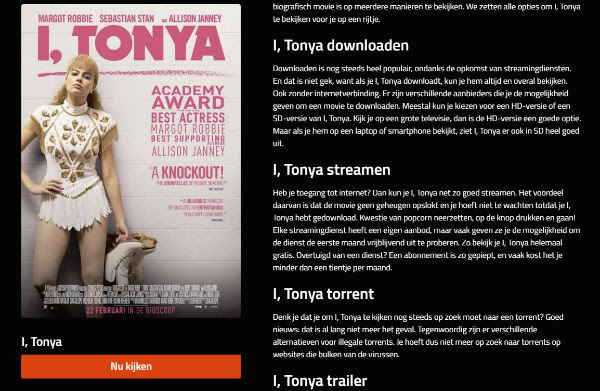 Way above that, however, there are eleven legal platforms listed. These include iTunes, Google Play and various local movie platforms, something a human reviewer can hardly miss.

Film.nl is by no means a pirate site. It’s exactly the opposite. The site was launched by members of the Dutch film industry last year to provide people an all-in-one search engine for legal content.

The keywords such as “torrent” and downloaden” are used to draw in pirates who search for illegal content using these terms. If we translate the Dutch text below “I, Tonya torrent” we read the following.

“Do you think that in order to watch I, Tonya, you still have to find a torrent? Good news: that’s no longer the case. Nowadays there are several alternatives to illegal torrents. So you no longer have to search for torrents on websites that are bursting with viruses.”

A clever way to confuse some pirates, perhaps, but maybe it’s an idea to alert the Web Sheriff as well next time, before he starts shooting at innocent targets again.

from TorrentFreak https://ift.tt/2yhBi62
via IFTTT
Posted by papampi at 1:31 PM