With file-sharers manually acquiring increasingly large libraries of content, several years ago it became clear that software to automate the process would prove popular with the masses.

One such tool was Sick Beard, a PVR-like piece of software that was able to utilize Usenet providers, indexers, and TheTVDB to identify airing dates for TV shows and automatically download whenever they became available online. It would then add the content to a user’s library ready for viewing.

Like many successful open projects, Sick Beard later found itself ‘forked’, with developers breathing life into SickRage, a GNU General Public Licensed tool that took Sick Beard’s dreams and ran with them. With improved Usenet and torrent support plus a whole raft of new features, SickRage gained an impressive following. 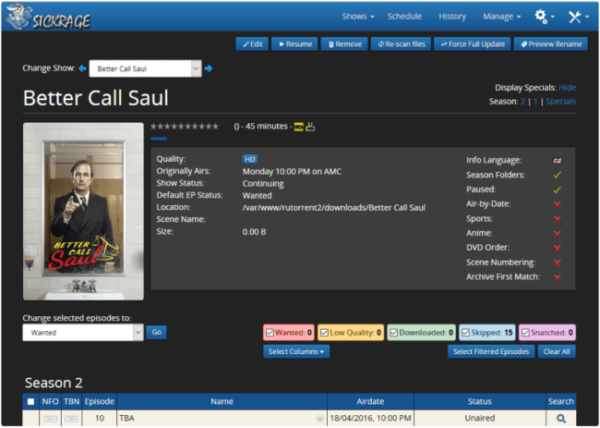 Unfortunately, however, SickRage began to suffer problems common to many projects where not every developer is an agreement on every point of action. This led to fragmentation, with devs moving to work on other similar projects. One of those who departed was a dev known as Echel0n, who started up his own SickRage variant operating from SickRage.ca.

In July 2017, things appeared to boil over when Echel0n (later self-identified as ‘Justin Tabish’) filed a DMCA complaint with Github, claiming copyright over the SickRage code.

“SiCKRAGE and the original code has not been provided or its use authorized, this is a violation of my copyright. I have a good faith belief the distribution of SiCKRAGE includes content of which the distribution is not authorized by the copyright owner, it’s [sic] agent, or the law,” the complaint reads.

Just days later, SickRage fought back, filing a counter-notice with Github. Perhaps unsurprisingly given the various contributors to long-standing open projects, the counter-notice points out a number of issues with the original DMCA notice.

Disputing all of its claims, the counter-notice states that the original SickRage copyright holder (@midgetspy) endorsed adding his name to the license and adding the counter-notice filer’s name “underneath his as credit for later contributions as per convention.” It also states that ‘Echel0n’ has no standing to make a complaint.

“As such, all other claims are disputed for this DMCA. We are in compliance with all applicable law to the best of our knowledge. Very little if any code is shared among these forks, however if complainant would like a prior credit added that would be amenable,” the notice adds.

With that, Gihub reinstated the project and for some time it appeared that an uneasy peace had broken out. It now transpires, however, that Echel0n (Tabish) was just getting warmed up.

As the image below shows, in September the developer registered the trademark ‘SickRage’ in the US with the United States Trademark and Patents Office (USPTO). 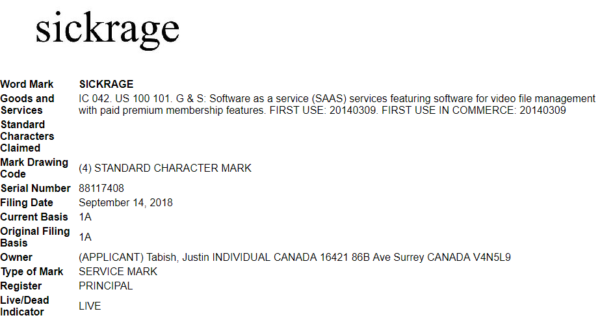 Armed with this piece of paper, Justin Tabish fired off a complaint to developer Dustyn Gibson (aka ‘miigotu‘) of the SickRage project, warning him to cease and desist using the SickRage trademark, even though it doesn’t appear to have been awarded yet. 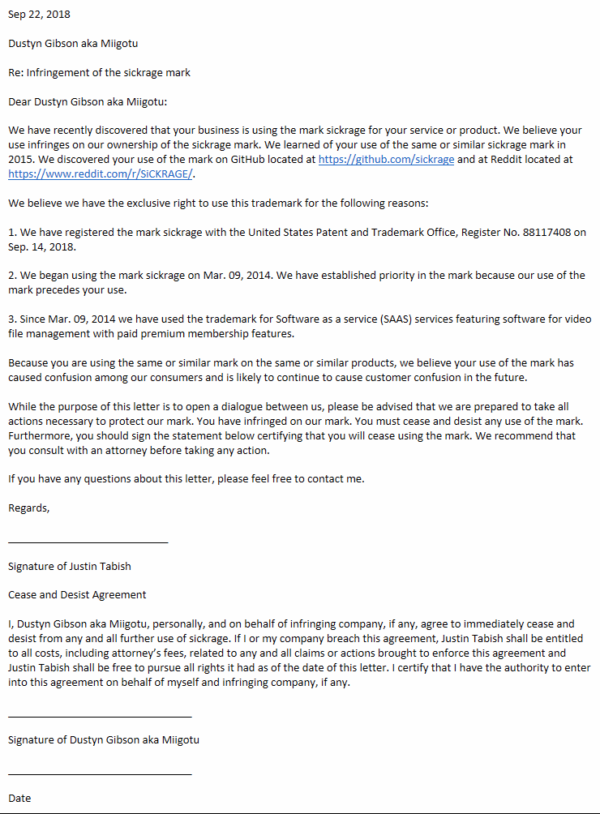 Tabish also wrote to Github, demanding that the site transfer ownership of the SickRage repository to him.

“I’d like to report a case of trademark infringement and am requesting transfer of ownership for the following organization to my control so that I can remedy the situation, the organization is https://ift.tt/2IJvsys and is owned/controlled by username Miigotu, user’s profile is located at https://ift.tt/2CuoWva; he told the company.

“This repo also has a website located at https://ift.tt/22xPmTL. This user/repo is a ex-team member of mine that I let go awhile back, they and others decided to open a repo on you’re servers under the exact same name of my company and project causing confusion and misleading members, as you can see in the title of the repo they have placed ‘The new home of the SickRage community’ which leads others to think there was some sort of change of ownership.”

Describing the effort as a “hostile takeover” attempt, ‘miigotu’ posted a note to the official Github account promising to fight every inch of the way.

“I will have to fight this again, he is claiming his ‘company’ owns a trademark to the name SickRage. This is a joke and I will fight it tooth and nail,” miigotu writes.

“Just another attempt by the drug addict to try and claim he owns the work that we all did on this project. He abandoned the project and we made it what it is. Then he popped up 2 years later and removed the entire team. If I have to take him to court, that will happen.”

There’s now a pretty huge argument taking place on Github as to who is right and wrong, and who is infringing on various rights. It’s a minefield of opinions that’s best read directly to be understood. Needless to say, it’s very messy indeed.

from TorrentFreak https://ift.tt/2E9nRuC
via IFTTT
Posted by papampi at 10:12 AM