Terrarium TV: One of the Best-Loved Pirate Apps Shuts Down 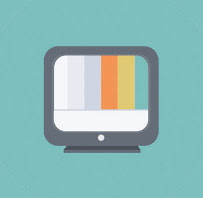 While Kodi and its dazzling array of addons grabs most mainstream piracy headlines, much simpler options lie just below the surface.

Referred to generally as APKs (taken from the installation format used by Android devices), these applications provide direct access to huge amounts of movie and TV show content. Most can be downloaded and installed in seconds and are extremely simple to use.

Perhaps the most impressive in recent years has been Terrarium TV. Inspired by the simplicity of Popcorn Time, Terrarium TV eschewed the use of torrents as a supply protocol. Instead, the software pulled in content from file-hosting sites in a similar way to Kodi addons, but with an almost non-existent learning curve.

Created by a developer who identified as Hong Kong-based Peter Chan (aka NitroXenon), Terrarium TV enjoyed a meteoric rise to stardom over the past couple of years. With only Showbox and a handful of other applications getting anywhere close to its volume of active users, Terrarium TV became the go-to app for Android users looking for a Netflix-style fix.

Now, however, the ride is over.

In a notification pushed to Terrarium TV users last night, NitroXenon explained that his days of working on the app are over.

“It has always been a great pleasure to work on this project. However, it is time to say goodbye. I am going to shut down Terrarium TV, forever,” he wrote.

“I know this day will come eventually. I know it would be hard to let go. But it is really time for me to move on to other projects.”

Thanking users for their support over the years, NitroXenon singled out Reddit moderator ‘Nic’ for his support. TorrentFreak reached out to him for comment but received no response. That didn’t really come as a surprise given that most threads discussing the end of Terrarium on Reddit are getting shut down almost as quickly as they’re being started.

The big question, of course, is why NitroXenon decided to close Terrarium TV down but again, the decision didn’t really come as a surprise. From pushing regular updates to the app as it grew (the last was around May), in recent months its developer has been mostly absent, with users requesting information but very little coming back.

As is often the case when services shut down abruptly, speculation builds that maybe the developer has been subjected to legal pressure. While that’s a distinct possibility (the MPA and its associates have reached into the Asia-Pacific region before to threaten developers of similar apps) there are no clear signs that happened here.

Equally, the rumor that NitroXenon was paid off by the studios to shut down the application is almost certainly untrue. If (and it is an if) NitroXenon was targeted, it is definitely not the style of the MPA (or the Alliance For Creativity and Entertainment) to offer cash for favors. If anything, they’re the ones demanding the money.

As can be seen from the image of the notification below, NitroXenon indicates that Terrarium TV will work until the end of September. However, in most (if not all) cases the app appears to be dead already. Users cannot get beyond the ‘UPDATE’ button.

While some Terrarium TV users are sarcastically describing this September 11 as the “worst in history,” it’s likely that other applications will take up the slack. TeaTV, which looks very similar to Terrarium TV, is already gaining traction.

Finally, now would also be a good time to look out for imposters claiming to be Terrarium reincarnated.

During the past few months, there has been an effort by third-parties to contact publications (such as TF and others in the tech space) to convince them that their website is the real home of Terrarium TV. However, the app hasn’t had a website of its own for some time, so the claims are easily debunked. 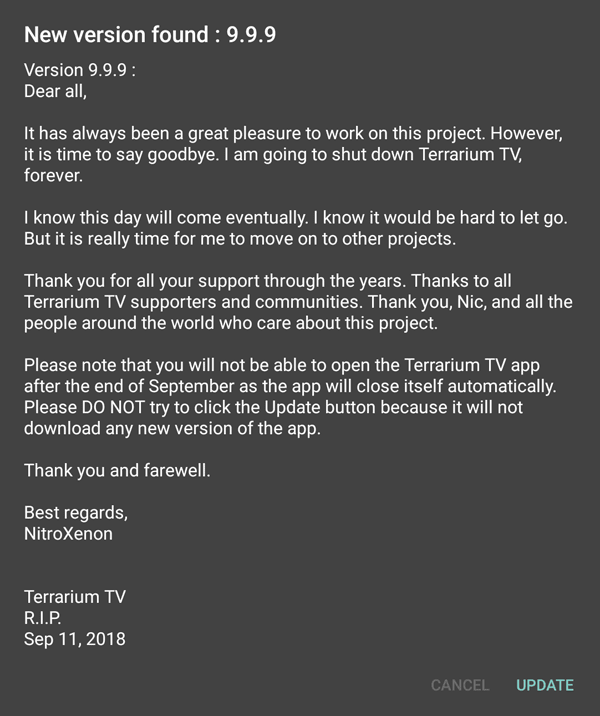 The closure of Terrarium TV follows after a similar APK pulled the plug. Morpheus TV took this decision in August after its developer decided it had received too much mainstream attention. Unlike Terrarium, however, the idea is to relaunch quietly under a new name, to a select group of people.

“Distribution will be restricted to a small group of individuals and hidden from public eyes like it was supposed to be,” the developer said.

from TorrentFreak https://ift.tt/2CKedxC
via IFTTT
Posted by papampi at 1:16 AM