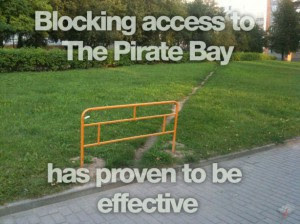 In July 2015, Portugal’s Ministry of Culture announced the signing of a memorandum between its own General Inspection of Cultural Activities (IGAC), the Portuguese Association of Telecommunication Operators (APRITEL), various rightsholder groups, the body responsible for administering Portugal’s .PT domain, and representatives from the advertising industry.

The memorandum laid out a new mechanism for blocking so-called ‘pirate’ sites. In common with similar frameworks elsewhere, the process can be triggered by a complaint from a rightsholder association. Local anti-piracy group MAPINET then collates evidence that a site is engaged in the unlawful distribution of copyright works and has failed to cease its activities.

The system was quickly utilized by rightsholders seeking to block access to their content. Within six months, 330 sites had been blocked by ISPs, but that was only the beginning. In the months and years that followed, hundreds more sites were rendered inaccessible but in common with similar programs elsewhere, no official list of blocked sites was made available. People are keeping watch, however.

SitesBloqueados (Blocked Sites) is a web portal run by Revolução dos Bytes (Bytes’ Revolution), a group of like-minded anti-censorship activists in Portugal. Created a few months after blocking began in the region, their comprehensive database now contains almost 1,400 domains, the majority of which have been blocked on copyright grounds.

“SitesBloqueados was mainly created because, although the Memorandum of Understanding contained certain requirements to make a site eligible to be blocked – such as 500 items [or links] to copyright content or one third of the site containing copyrighted material – there was no official way to validate that data and make sure that these ‘rules’ are being respected,” team member Henrique Mouta informs TF.

The manner in which the list is maintained is quite unique. As mentioned earlier, there are no official sources listing blocked domains so the people behind SitesBloqueados had to get creative. Alongside this project they also run Ahoy!, a Chrome and Firefox extension that allows users to circumvent censorship in Portugal and it’s through that tool they gather information.

“Ahoy! basically bypasses any traffic to a blocked site through our own proxies, allowing the users to navigate in a free, uncensored internet,” Henrique explains.

As this extension works on a whitelist basis, we had to create a mechanism to automatically detect and whitelist sites that have been blocked, so if a user accesses a blocked site that is not on our list yet, we get a notification so we can review the site and add it to the list. That is the list that is also powering SitesBloqueados.pt.”

When the voluntary agreement was first announced, local ISPs came under intense criticism for agreeing to work with copyright holders without need for a court process. However, Henrique says they are actually in a precarious position.

“We usually see the ISPs as the bad guys, blocking sites, throttling our internet and, more recently, going against the Internet Neutrality. But, in this particular case, all the major ISPs are forced to block any sites that have been requested in 15 days, or they might pay fines for every single day after the deadline.

“MAPiNET (MOVIMENTO CÍVICOANTI PIRATARIA NA INTERNET) is the organization, alongside with IGAC (Inspecção Geral Das Actividades Culturais), that compiles the lists of sites and sends them to the ISP. It’s usually two lists per month. Of course, I’m not excusing the ISPs, as they should stand up against censorship. But we all know that’s asking too much of them,” Henrique adds.

Interestingly, the first site blockade in Portugal wasn’t actioned on copyright grounds. It was, in fact, targeted at Uber.com.

“This happened in June 2015, after a court order to suspend all Uber activity in Portugal. This opened a huge precedent, with all these anti-piracy organizations seeing how easy is to block a site, technically speaking.

“So, at the end of August of that same year, the [anti-piracy] Memorandum was signed by all the parties and, since then, both MAPiNET and IGAC have the power to request any site block, without any court order, without any legal order,” Henrique notes.

This lit a fire under the team and two and half years later, Ahoy! is now being used by 100k people to unblock almost 1,400 sites, while feeding back information on newly blocked domains. These are then added to the blocklist database and considered for unblocking methods via the addon.

Currently, around 50 new domains are blocked every month in Portugal and Henrique and the team are determined to document every one of them. They believe that by keeping an eye on things publicly, it lets the anti-piracy groups know they are being watched and cannot act with impunity. Around 90% of all blocked domains are restricted on copyright grounds but some also fall foul of new gambling laws that forbid unlicensed sites.

From the beginning, the big question has surrounded potential abuse. So, given the lack of a court process, have any players attempted to game the system?

“So far, we haven’t seen any signs of intentional abuse. There have been a few problems with sites being wrongly blocked. The most popular case is Carbon Games site that was blocked nearly two years ago, and it was mistaken for a different site, a Gambling site, named Carbon Gaming,” Henrique says.

“A few months later, we detected another case. A Spanish journalist had a website where he was posting videoclips of the latest releases. All of these releases were originally on YouTube, uploaded by the respective owners, however that was not enough to keep the site alive.”

Under pressure from Revolução dos Bytes this block was reversed but it’s not the only instance of errors. Non-existent sites have been blocked as have sites publishing headlines and linking to the respective online newspapers.

With blocking continuing at a steady pace, dozens of new domains are restricted every month. But Henrique and the team believe it won’t achieve anything positive and only serves to harm the Internet and democracy.

“Blocking sites to prevent piracy is the same as being on a sinking submarine, trying to patch every leaking hull hole with duct tape. If they want to fight piracy, they should try to understand, in the first place, why it happens and what they can do to change it.

“It’s well known that having cheap and quality services like Netflix and Spotify helped Internet piracy levels drop to record lows, DRM issues aside, of course. And the worst of it is the timing: these organizations see the decreasing levels of piracy as a signal that their stupid censorship is actually working. I’m really afraid that this is now an unstoppable snowball. The Internet in Portugal has seen much better days,” Henrique concludes.

But while he’s pessimistic over current developments, it appears that the Ahoy! movement is only set to grow. The team say they want to bring the browser-based system to other countries that are suffering from similar blockades and that suggestions from the public are welcome.

from TorrentFreak http://ift.tt/2DEVUpm
via IFTTT
Posted by papampi at 10:33 AM